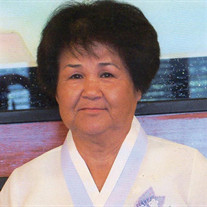 Ok-Cha (Hong) McDaniel was one of four children born to, Chae Jin and Lee Shin Ok (Lee) Hong, in Ulchin, South Korea on August 23, 1946, where she grew up and attended school. It was there in Korea, where she met a tall handsome soldier named Talmage McDaniel. He swept Ok-Cha off her feet, and later brought her back to the states. The happy couple married on January 28, 1973, at the Church of Christ in Richland, Missouri. God blessed them with over forty-four years together before Talmage’s passing on March 24, 2017. Due to Talmage’s military career, the couple lived in several states including, California, Kentucky, Oklahoma and Texas, before settling back home to Richland in 1994. Ok-Cha and Talmage enjoyed their life together while proudly raising their children, Danny and Darriel. Ok-Cha lovingly cared for her home and family; they were always first in her life. In 2001, Ok-Cha began working outside her home at MWR, also known as, Military Welfare in housekeeping; and later worked at Max Auto Body Shop in Waynesville, Missouri, preparing cars to be painted. In her spare time, Ok-Cha loved playing cards, and going to the casinos with her friends, or shopping for that favorite Coach, handbag. Ok-Cha passed away at Mercy Hospital in Joplin, Missouri, on the evening of Tuesday, April 24, 2018, having attained the age of 71, with her loving son, Danny by her side. Though she is gone from our sight, Ok-Cha will live on in hearts forever and those who knew her will treasure each and every precious memory ever made. Ok-Cha is survived by her sons: Danny McDaniel and his wife, Angie of San Diego, CA and Darriel McDaniel of the state of MO, Talmage’s two children: Daryl McDaniel and his wife, Joyce of Chicago, IL and Tamara of the state of WA; 7 grandchildren: Ryan, Matthew, Madison, Ryleigh, Hannah, Suzie and Sarah McDaniel; several nieces, nephews, and other relatives and friends. Ok-Cha was preceded in death by her parents, her beloved husband, Talmage, and three brothers. Services were held at 12:00 Noon, Monday, April 30, 2018 in the Memorial Chapel of Richland with Pastor Christopher Hendrix officiating. Music selections included “Go Rest High on that Mountain” and “The Old Rugged Cross.” Family and friends served as escorts. Burial followed in the Oaklawn Cemetery of Richland, Missouri. Memorial contributions may be made in memory of Ok-Cha McDaniel and may be left at the Memorial Chapel of Richland.

Ok-Cha (Hong) McDaniel was one of four children born to, Chae Jin and Lee Shin Ok (Lee) Hong, in Ulchin, South Korea on August 23, 1946, where she grew up and attended school. It was there in Korea, where she met a tall handsome soldier named... View Obituary & Service Information

The family of Ok Cha McDaniel created this Life Tributes page to make it easy to share your memories.

Ok-Cha (Hong) McDaniel was one of four children born to, Chae...