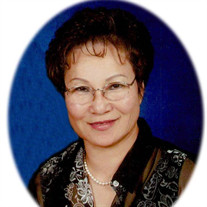 Ok Cha Cooley, daughter of the late Baek Tae Su and Kim Tu Yun, was born November 7, 1942 in Kyoto, Japan. As a young girl, Ok Cha grew up in Korea and attended school. On October 21, 1965 in Seoul, Korea, Ok Cha was united in marriage to Ronald Lee Cooley, a United States soldier. They shared over 52 years of marriage together and many wonderful memories. After their marriage, Ok Cha came to the United States and she became a United States citizen. Due to Ronald being in the military, they moved to different duty stations and were transferred to Fort Leonard Wood in 1978 where they decided to remain after Ronald retired. After coming to Fort Leonard Wood, Ok Cha began working for EDP as a cook and worked faithfully for 20+ years before retiring. Ok Cha made a profession of faith in her early years and she was a faithful member of the First Korean Baptist Church of Waynesville. Her whole life revolved around her church, home and work. She loved her church and was always willing to help wherever she was needed. Ok Cha went home to be with her Lord Tuesday, January 9, 2018 in General Leonard Wood Army Community Hospital of Fort Leonard Wood, Missouri having attained the age of 75 years. She will be sadly missed by all those that knew and loved her. Ok Cha leaves to cherish her memory, her husband, Ronald L. Cooley of Waynesville, MO; her nephew, Songno Baek of Irvine, CA, and a host of friends. In addition to her parents, Ok Cha was preceded in death by one brother. Services were held at 10:00 a.m. Tuesday, January 16, 2018 in the Memorial Chapels and Crematory of Waynesville / St. Robert with Pastor Soo Gap Cheong officiating. Burial followed in the Missouri Veterans Cemetery of Waynesville.

The family of Ok Cha Cooley created this Life Tributes page to make it easy to share your memories.