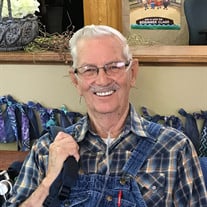 Oliver Goldsmith Thomson was born April 16, 1938 at Wildwood, Missouri, which is now Fort Leonard Wood, Missouri. He was one of eight children born to the union of the late Franklin Muse and Katie May (Stewart) Thomson. Oliver attended elementary school in the Laquey area and graduated from Richland High School with the Class of 1956. In 1958, Oliver enlisted in the United States Army and was a veteran of the Vietnam Conflict. After Vietnam, Oliver transferred to the United States Air Force. He was a true and dedicated military person. He was awarded the National Defense Service Medal, Army Commendation Medal, Expeditionary Medal, Republic of Vietnam Commendation Medal, Good Conduct Medal (4th Award), Vietnam Service Medal, and the Bronze Star Medal for Meritorious Service. Technical Sergeant Thomson retired from active duty in September 1978. While in the Air Force, Oliver was instrumental in the education of thousands of students in the administrative career field, including writing books, teaching typing, counseling, plus self-training of two courses each year. On March 1, 1958, Oliver was united in marriage to Janet Sue Vandergiff. They shared 32 years of marriage and four children: Timothy, Tamara, Melody and Darla. After retiring from the military, Oliver began working for E.I. DuPont DeNemours Pigments Division of Delisle, Mississippi. While working at DuPont, in a short time, Oliver advanced through Production Assistant, Industrial Mechanic, Industrial Electrician and improved certain jobs and productivity which helped in reduction of plant production costs and was rewarded monetarily. While living in Mississippi, Oliver met Linda L. Ladner. They were united in marriage on January 8, 1993 and shared over 26 years of marriage together. Upon their union, two families were blended and Oliver gained two more children, Terry and Kristina. As a young person, Oliver accepted the Lord Jesus Christ at a revival in the Laquey schoolhouse. He claimed no denomination until later he became a member of the Pass Road Baptist Church in Biloxi, Mississippi. He later became of the Apostolic faith and attended an Apostolic church in Las Vegas, Nevada and then through the baptism of the Holy Spirit became a Pentecostal. According to Oliver, he was not blessed with many talents, but gifted with love and a wanting to help attitude. Putting this attitude and knowledge to use, he helped to build three church buildings on the Mississippi Gulf Coast. He was always keeping in mind those about him and their needs. He appreciated the outdoors and the nature that God provided for our enjoyment both to look at and for nutrition. He enjoyed Southern Gospel music, Classical music and easy listening music. Oliver loved his family deeply and enjoyed spending time with them every chance he could. He was a kindhearted man who never met a stranger and had a contagious smile and joyful spirit which was truly a testament to his faith. Oliver will be sadly missed, but fondly remembered by all those who knew and loved him. He leaves to cherish his memory, his wife: Linda Thomson of the home; three children: Tim Thomson (Sherrie) of Crocker, MO, Melody Thomson of Houston, TX and Darla Swiatowy (Mike) of Ocean Springs, MS; two stepchildren: Terry Ladner and Kristina Ladner, both of Springfield, MO; nine grandchildren: Sherrie, Alexandra, Shaun, Angela, Jason, Nathan, Felicia, Shane and Seth; nine step-grandchildren: Ashli and Khristopher, Danyail, Tyler, Jada, Gabrielle, Lily, Oliviaand Noah; ten great grandchildren; one step great grandson; numerous nieces, nephews, other relatives and friends. Even though he is gone from our sight, Oliver’s joyful spirit and contagious smile will live on in our hearts forever. Services were held at 10:00 a.m. Friday, October 25, 2019 in the Memorial Chapels and Crematory of Waynesville / St. Robert with Rev. Robert E. Hohman, Sr., officiating. Serving as escorts were Nathan Thomson, Delaine Wagoner, Neil Vowels, Clinton Peterson, Toby Hill and Christopher (CJ) Copling. Burial with military honors followed in the Missouri Veterans Cemetery of Waynesville. Military honors were provided by the United States Army of Fort Leonard Wood, Missouri. Memorial contributions may be made in memory of TSGT (Ret) Oliver Thomson and may be left at Memorial Chapels and Crematory of Waynesville / St. Robert.

Oliver Goldsmith Thomson was born April 16, 1938 at Wildwood, Missouri, which is now Fort Leonard Wood, Missouri. He was one of eight children born to the union of the late Franklin Muse and Katie May (Stewart) Thomson. Oliver attended elementary... View Obituary & Service Information

The family of TSGT (Ret) Oliver Goldsmith Thomson created this Life Tributes page to make it easy to share your memories.