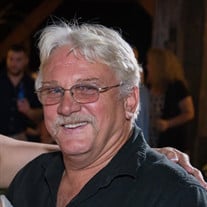 Oric Alois Arnold was born October 13, 1959 in East St. Louis, Illinois. He passed away Tuesday, June 2, 2020 in the General Leonard Wood Army Community Hospital of Fort Leonard Wood, Missouri having attained the age of 60 years, 7 months, and 20 days. As a young boy, Oric attended school in Dupo, Illinois and graduated from Dupo High School. After high school, he began working for Monsanto Chemicals in the St. Louis area. After a time, he left to pursue a career in exhibition racing and fabrication of the vehicles. He competed in “World of Wheels” competitions for several years. In 2015, Oric went to work for the Department of Defense on Fort Leonard Wood, Missouri as a mechanic for Logistic Readiness Center, all the while continuing his love of the expedition racing. On October 9, 2010, Oric was united in marriage to Bonnie Sue Stephens in Eureka Springs, Arkansas. They shared over 9 years of marriage together and many wonderful memories. In his spare time, Oric enjoyed going camping with Bonnie and was an avid animal lover. Most importantly, he treasured those times spent with Bonnie and his family. He loved them dearly and would do anything for them. Oric will be sadly missed, but fondly remembered by all those that knew and loved him. He leaves to cherish his memory, his wife: Bonnie S. Arnold of Richland, MO; one sister: Laura Arnold (Gene Sperling) of Thousand Oaks, CA; other relatives and a host of friends. Oric was preceded in death by his father: Ulrich Alois Arnold; his grandmother who raised him: Magdalena Arnold; and his grandfather: Harvey Arnold. Even though he is gone from our sight, his big smile and adventurous spirit will live on in our hearts forever. Funeral services were held at 1:00 p.m. Friday, June 12, 2020 in the Memorial Chapels and Crematory of Waynesville with Pastor Danny Graves officiating. The songs “I Cross My Heart” by George Strait, “Hero” by Enrique Iglesias and “Go Rest High on that Mountain” by Vince Gill were played. Memorial contributions may be made in memory of Oric Arnold and may be left at Memorial Chapels and Crematory of Waynesville / St. Robert.

The family of Oric Alois Arnold created this Life Tributes page to make it easy to share your memories.