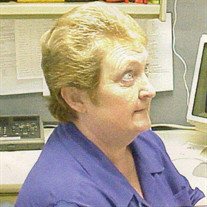 Pamela Sue Mayer, daughter of Billy Joe Curley and Ruth Ann Ross was born June 3, 1951 in Parrish, Illinois where she grew up and attended school. In 1970 Pam entered the United States Army proudly serving her country and was awarded the National Defense Service Medal. After her honorable discharge in 1971, Pam pursued a career as a payroll clerk for the Department of Defense where she worked until her retirement from Ft. Leonard Wood, Missouri. On February 27, 1971 Pamela married John Mack Mayer in Atlanta, Georgia and to this union four children were born. Together they shared over thirty two years of love and laughter until his passing on June 4, 2003. In her spare time, Pamela loved watching old westerns, especially Gunsmoke; she also enjoyed solving puzzles, cooking, watching and feeding hummingbirds. She was also known to be a Bingo fanatic; playing every chance she could. Pamela was preceded in death by her father and husband. Pamela passed away on May 14, 2017 in Lebanon, Missouri having attained the age of 65 years, 11 months and 11 days. She leaves behind to cherish her memory four children, John M. Mayer, Jr. of Richland, MO, Jason M. Mayer of Freeburg, MO, Christopher “Troy” Mayer of Richland, MO and Sharon V. Brown of Richland, MO; one beloved granddaughter, Chelsea Ann Mayer of Richland, MO; her mother Ruth Ann Bradley of Christopher, IL and several other relatives and friends. Services were held at 11:00 a.m., Friday, May 19, 2017 in the Memorial Chapel of Richland with Pastor Christopher Hendrix, Sr. officiating. Favorite recorded music included, “”I Fall to Pieces” and “Walkin’ After Midnight”. Pam’s loving family served as escorts. Burial followed with Military Honors at 2:00 p.m., in the Missouri Veteran Cemetery, Springfield, Missouri. Services were entrusted to Memorial Chapel of Richland. Memorial contributions may be made in memory of Army Veteran, Pamela Sue Mayer and may be left at the Memorial Chapel of Richland. Online condolences may be sent to www.memorialchapelsandcrematory.com

Pamela Sue Mayer, daughter of Billy Joe Curley and Ruth Ann Ross was born June 3, 1951 in Parrish, Illinois where she grew up and attended school. In 1970 Pam entered the United States Army proudly serving her country and was awarded the National... View Obituary & Service Information

The family of Pamela Sue Mayer created this Life Tributes page to make it easy to share your memories.