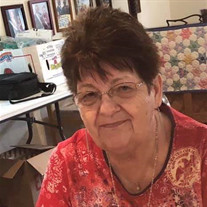 Patsy Lorene Alexshonis, daughter of the late Preston L. and Wanda M. (McMinn) Allen, was born October 7, 1940 in Arkansas City, Kansas. She passed away Tuesday, February 11, 2020 in the General Leonard Wood Army Community Hospital of Fort Leonard Wood, Missouri having attained the age of 79 years. As a young girl, Patsy grew up in Kansas where she attended school. She furthered her education and obtained an Associates Degree in Nursing. She earned her LPN License and worked in Garden City, Kansas for a few years as a nurse in different facilities. Patsy lived in Colorado for many years before moving to Missouri in 1981. After moving to Missouri, Patsy met a man by the name of Joseph Alexshonis and they were united in marriage on December 8, 1984 in Springfield, Missouri. They shared 23 wonderful years of marriage together before Joseph went home to be with his Lord on May 19, 2007. After marrying Joseph, who was an Army veteran, Patsy and the family moved to Fort Leonard Wood. She began working as a nurse at the hospital in Rolla, Missouri and retired after 20 years. She also worked in local nursing homes as well and enjoyed taking care of the patients. She spent a total of 31 years caring for patients and their needs. After retiring from nursing, Patsy did not quit being involved. She became active in the Waynesville Senior Citizens Center and served as President of the Board for a few years. She was also involved in her church, Waynesville United Methodist Church for 14 years until her health began to decline. In her spare time, Patsy was an avid St. Louis Cardinal baseball and Kansas City Chiefs football fan. She was faithful to watch every game that she could. Patsy was a very sweet and honest lady. Everyone adored and loved her tremendously and her family was very important to her. She would do anything for them and always looked forward to every moment she could spend with them, especially the grandchildren. Patsy will be sadly missed, but fondly remembered by all those who knew and loved her. She leaves to cherish her memory, her daughter: Valerie Doty Jordan of Garden City, KS. Patsy had four stepchildren: Susan Boyer (Dale) of Battle Creek, MI, Linda Nichols (Joe) of Springfield, MO, Louise Alexshonis of Phoenix, AZ and Joseph Paul Alexshonis, Jr. (Sophie) of College Station, TX. In addition, she had sixteen grandchildren, twenty-three great grandchildren, and six siblings: Bob Allen, Chris Allen (Margie), Roberta Kruger, Sandy Lauer (Victor), Janet Collins and Shirley Riley (Marvin); numerous nieces, nephews, other relatives and friends. In addition to her parents and husband, Patsy was preceded in death by three children: Joyce Doty (2017), Tracey Kasiska (2013) and Wade Doty (2009); and one brother: Willie Allen. Celebration of Life Services will be held at 4:00 p.m. Saturday, February 15, 2020 in the Memorial Chapels and Crematory of Waynesville / St. Robert. Visitation will be held from 3:00 p.m. until time of service at 4:00 p.m. Saturday, February 15, 2020 in the funeral home. Memorial contributions may be made in memory of Patsy Alexshonis and may be left at Memorial Chapels and Crematory of Waynesville / St. Robert.

The family of Patsy Lorene Alexshonis created this Life Tributes page to make it easy to share your memories.

Patsy Lorene Alexshonis, daughter of the late Preston L. and...