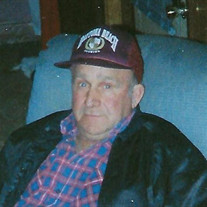 Paul Medford Anderson, son of the late Harry and Orpha Marie (York) Anderson, was born April 18, 1936 in Bloodland, Missouri. He passed away Friday, July 19, 2019 in his home in Crocker, Missouri having attained the age of 83 years. Paul grew up in Pulaski County and attended school in Laquey, Missouri. He met a young girl by the name of Mary Ann Green. They were united in marriage on August 26, 1957 in Laquey, Missouri. They shared over 61 years of marriage together and were blessed with nine children: Dorothy, Andy, Pat, Mary Kay, Paul Jr, Roxie, Christy, Elaine and Teressa. Shortly after Paul and Mary Ann were married, he began working in construction and would go to St. Louis every week and come home on the weekends after working all week in St. Louis. He was a member of the Carpenters Union of St. Louis. After retiring, Paul was able to do more of the things that enjoyed. He loved going to auctions and was very musically talented. He loved Bluegrass and Gospel music and could yodel as well. He enjoyed making furniture for his family and friends and also being outdoors. You could find him coon hunting, fishing, racing stock cars or taking motorcycle trips with Mary Ann. Most importantly, he loved spending time with his family and especially enjoyed doing things with his kids and grandchildren. Paul had made a profession of faith early in life and was a longtime member of the Hilltop Church of Crocker. Paul leaves to cherish his memory, his wife, Mary Ann Anderson of the home; his seven children, Dorothy Gleave of Richland, MO, Andy Anderson (Peggy) of Swedeborg, MO, Pat Anderson (Kristy) of Swedeborg, MO, Mary Kay Davis (Charlie) of Swedeborg, MO, Paul Anderson, Jr. (Cindy) of Kansas City, KS, Roxie Coleman of Lebanon, MO, and Christy Summers of Lebanon, MO; seventeen grandchildren, twenty-five great-grandchildren, and three great-great-grandchildren; three sisters, Lois Elseman (Lloyd) of Dixon, MO, Carolyn Jones (Nile) of Springfield, MO, and Zorabelle “Belle” Taylor of Swedeborg, MO; his son-in-law Kurt Massey; a number of nieces and nephews; as well as a host of other relatives and friends. In addition to his parents, Paul was preceded in death by two daughters: Elaine Anderson and Teressa Massey; and two brothers: Snowden and Richard J. Anderson.

Paul Medford Anderson, son of the late Harry and Orpha Marie (York) Anderson, was born April 18, 1936 in Bloodland, Missouri. He passed away Friday, July 19, 2019 in his home in Crocker, Missouri having attained the age of 83 years. Paul grew... View Obituary & Service Information

The family of Paul Medford Anderson created this Life Tributes page to make it easy to share your memories.