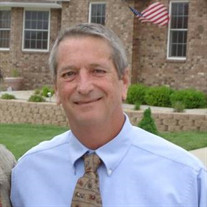 Paul Xavior Hardman, son of the late Owen and Bernice Hardman, was born March 23, 1950 in Springfield, Missouri. At a young age, he moved to Waynesville with his teacher parents and began a long relationship with the Waynesville Schools. Paul entered the United States Navy after graduating from Waynesville High School in 1968 and served as a Seabee in Vietnam. He was always proud of his military service. Returning home in 1971, Paul began a career in HVAC with Shivers Refrigeration. On a blind date, arranged by his sister, Paul met a young Waynesville teacher in 1972. On June 15, 1974, Paul married Lula Mae “Luge” Pate at the St. Robert Bellarmine Catholic Church. Two children were the result of that blind date. In 1977, Ryann Shea was born and in 1979, Paul Xavior Hardman III, “Trey”, completed this family. Paul and Luge have been fortunate to have seven grandchildren and enjoy time spent with them. Paul was a hard worker and a “jack of all trades”, working in HVAC with Shivers Refrigeration and later joining the United States Postal Service as a postal clerk where he retired in 2003. As a couple, Paul and Luge enjoyed traveling, dancing, gaming with friends, and baseball. They were avid St. Louis Cardinal fans and were short of fulfilling a “Bucket List” wish to visit all Major League ballparks. In 2012, Paul was face with the biggest challenge of his life as he developed kidney failure leading to a long and valiant five year struggle full of hope and disappointment. The community of Waynesville rallied around their struggle and it helped both Luge and Paul through the ups and downs. Paul passed away Wednesday, June 1, 2016 in his home having attained the age of 66 years. He will be sadly missed, but will live on forever in our hearts. Paul leaves to cherish his memory, his wife: Luge Hardman of the home; daughter: Ryann Hardman (Justin Wauthier) of Denver, CO; son: Trey Hardman of Harrison, AR; one brother: Michael Hardman (Diane) of Henderson, NV; one sister: Christine Garber (Nick) of Sulphur, LA; seven grandchildren: Paige, Jaxson, Paul IV, Jacob, Daphne, Brookelyn, and Desmond; brothers and sister-in-law: Denny, Wayne, Craig, Kelly and Randy; host of cousins, nieces, nephews, and many friends. Services were held at 10:00 a.m. Saturday, June 4, 2016 in the Westside Baptist Church of Waynesville. Pastor John Shaw opened the service with prayer; Paul’s brother Mike Hardman talked about Paul’s early life; Doug Levasseur, family friend, talked about Paul’s family life; Nelson Morgan, family friend, talked about Paul’s friends and the community; and Rev. Danny Graves gave a message of hope. The songs “I Love” by Tom T. Hall, “Wind Beneath My Wings” by Bette Midler, “Angels Among Us” by Alabama and “On the Other Side” by Dailey & Vincent were played. Serving as escorts were Tom Tenschert, Doug Levasseur, Nelson Morgan, Ed Fisher, Lee Kinder and George Beasley. Serving as honorary escorts were Mike Dunbar, Jerry Wauthier, Roger Olney, Tim Berrier, Steve Ward and Carlos Arrastia. Burial with military honors followed in the Sunset Memorial Estates Cemetery with Chaplain (MAJ) Felix Kumai. Military honors were provided by the United States Navy and the United States Army of Fort Leonard Wood, Missouri. Memorial contributions may be made in memory of Paul Hardman to Janet’s Wish, Mercy Hospice or the American Kidney Fund and may be left at the funeral home.

Paul Xavior Hardman, son of the late Owen and Bernice Hardman, was born March 23, 1950 in Springfield, Missouri. At a young age, he moved to Waynesville with his teacher parents and began a long relationship with the Waynesville Schools.... View Obituary & Service Information

The family of Paul Xavior Hardman created this Life Tributes page to make it easy to share your memories.