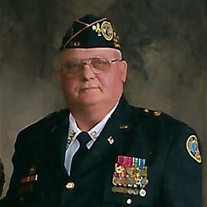 1SGT (Ret) Paul Edward Schuler, Jr., son of the late Paul Edward Schuler, Sr. and Betty (Clemmons) Schuler, was born May 17, 1948 in Cincinnati, Ohio. He passed away Sunday, October 28, 2018 in his home in Dixon, Missouri having attained the age of seventy years. Paul grew up in Cincinnati and graduated from high school. During his high school years, he met a girl by the name of Belinda Sue Reed and they became high school sweethearts. They were united in marriage on September 18, 1969 and shared over forty-nine years of marriage together and were blessed with three children: Donald, Lorie and Paul III. In 1966, Paul enlisted in the United States Army and served his country faithfully until his retirement in 1990. He had attained the rank of First Sergeant and earned several awards and commendations; some of which include: National Defense Service Medal-2, Army Service Ribbon, Armed Forces Expeditionary Medal, Vietnam Service Medal-1, Vietnam Campaign Medal, Overseas Service Ribbon-5, Bronze Star Medal, Republic of Vietnam Cross of Gallantry w/Palm, Driver Badge, Army Good Conduct Medal-8, Army Commendation Medal-5, Meritorious Service Medal, Army Achievement Medal-3, Noncommissioned Officer Professional Development Ribbon-3, Expert Qualification Badge .45 Cal Pistol, Expert Qualification Badge M-16 Rifle, Expert Qualification Badge M-14 and Expert Qualification Badge 9mm Pistol. After his retirement from the military, Paul began working with the Department of Corrections in Fulton, Missouri and retired in 2007. After retiring from the DOC, Paul was then able to turn his full attention to his passion and that was helping other veterans through different organizations. Paul was a member of the Disabled American Veterans and served as Past Commander, American Legion, Veterans of Foreign Wars, the National Order of Trench Rats and the Korean War Veterans. He was involved with many of these organizations state conventions. In his younger days, Paul enjoyed being outdoors while hunting, fishing and camping. He also played on several bowling leagues and was a member of different truck and van clubs. As his health began to fail, his favorite pastime was putting large puzzles together with framing and binding them, woodworking and would make many of the frames that he placed around his puzzles. He was an avid collector of eagles and was always looking for one that he might not have. Most importantly, he loved spending time with his family, especially the grandchildren and looked forward to every time they could get together. Paul leaves to cherish his memory, his wife: Belinda Schuler of the home; three children: MAJ (Ret) Donald Mazza (Melissa) of Columbus, OH, Lorie Layman (Craig) of Crocker, MO and Paul Schuler, III of Columbia, MO; fourteen grandchildren: Andrea Terry (Kris), PVT Caleb Layman, Justin Mazza, Anthony “Tony” Mazza, Matthew Mazza, Christopher King, Devon Schuler, Kason Schuler, Gavin Schuler, Carter Schuler, Ava Schuler, Gage Crow and Tyler Johnson; three brothers: Fred Schuler (Wayne) of the state of Florida, Richard Schuler (Brenda) of the state of Arizona and Lawrance Schuler of the state of Ohio; two sisters: Sandra Fernandez of the state of Mississippi and Christy Eichler of the state of Ohio; several nieces, nephews, other relatives and friends. In addition to his parents, Paul was preceded in death by four siblings: David Schuler, Gary Schuler, Michael Schuler and Mary Ann Garbard; and one grandson: Kyle Schuler. Not only was Paul a devoted family man, but he was also truly devoted to his country and the veterans that have made this country great. His true mission in life was to honor his country by continuing to serve in his community. He was a huge contributor to Pulaski County and will be sadly missed. Services were held at 12:00 p.m. Thursday, November 1, 2018 in the Memorial Chapels and Crematory of Waynesville / St. Robert with Pastor Billy Williams officiating. MAJ (Ret) Donald Mazza and Fred Schuler recalled their wonderful memories of Paul. The songs “The Lion Sleeps Tonight”, “Amazing Grace”, “Old Time Religion” and “Rock of Ages” were played. Graveside services with military honors were held at 9:00 a.m. Friday, November 2, 2018 in the Missouri Veterans Cemetery of Waynesville. Military honors were provided by the United States Army of Fort Leonard Wood, Missouri. Memorial contributions may be made in memory of Paul Schuler and may be left at the funeral home.

1SGT (Ret) Paul Edward Schuler, Jr., son of the late Paul Edward Schuler, Sr. and Betty (Clemmons) Schuler, was born May 17, 1948 in Cincinnati, Ohio. He passed away Sunday, October 28, 2018 in his home in Dixon, Missouri having attained the... View Obituary & Service Information

The family of 1SGT (Ret) Paul Edward Schuler Jr. created this Life Tributes page to make it easy to share your memories.