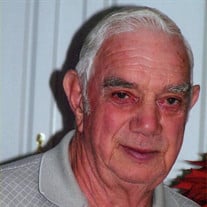 Peter J. Babcock, son of the late Peter E. and Mildred (Slimmer) Babcock, was born March 13, 1932 in Gaylord, Michigan where he grew up and attended school. On December 17, 1955, Helen was united in marriage to Peter J. Babcock. They shared over 60 years of marriage together and were blessed with two children: Patricia Ann (October 1960) and Michael Eugene (July 1964). Peter worked for Continental Motors and then entered the United States Army. He served his country faithfully for two years and was honorably discharged. After moving to the Waynesville / Fort Leonard Wood area, Peter and Helen owned and operated their own Fenced Parking Lot and Garage in St. Robert, Missouri and also acquired a U-Haul dealership before retiring to the lake area. Peter’s main focus in life was spending time and taking care of his family. They were his number one priority. In his spare time, he loved feeding the deer, squirrels and birds and enjoyed watching them as they ate. Peter passed away Friday, August 19, 2016 in the Life Care Center of Waynesville, Missouri having attained the age of 84 years. He will be sadly missed, but fondly remembered by all those that knew and loved him. Peter leaves to cherish his memory, his children: Patricia Perez (Clemente) of St. Robert, MO and Michael Babcock (Denise) of Lebanon, MO; other relatives and friends. In addition to his parents, Peter was preceded in death by his wife, Helen Ruth Babcock (June 12, 2016); sister, Phyliss Gates; and stepfather, Kenneth Harris. Services were held at 10:00 a.m. Saturday, August 27, 2016 in the Memorial Chapels and Crematory of Waynesville / St. Robert with Pastor Christopher Hendrix officiating. The songs “Amazing Grace”, “The Old Rugged Cross”, “In the Garden” and “Wind Beneath My Wings”. Serving as escorts were Mike Bollinger, Mike Rothwell, Tom Hackler, Ferman Espinoza, Steve Wood and Kenneth Harrison. Serving as honorary escort was Clem Perez. Burial followed in the Sunset Memorial Estates Cemetery of Waynesville, Missouri. Memorial contributions may be made in memory of Peter Babcock to the American Cancer Society or the American Heart Association and may be left at the funeral home.

Peter J. Babcock, son of the late Peter E. and Mildred (Slimmer) Babcock, was born March 13, 1932 in Gaylord, Michigan where he grew up and attended school. On December 17, 1955, Helen was united in marriage to Peter J. Babcock. They... View Obituary & Service Information

The family of Peter J. Babcock created this Life Tributes page to make it easy to share your memories.