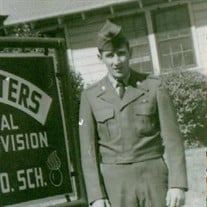 MSG (Ret) Philip Joseph Michaud, son of the late Blone and Clara (Paradis) Michaud, was born August 9, 1930 in Madawaski, Maine where he grew up and attended school. As a young man, Philip moved to Louisiana and shortly thereafter in 1954, he enlisted in the United States Army and served his country faithfully until his retirement in 1976. He had attained the rank of Master Sergeant and earned several awards and commendations; some of which include: Good Conduct Medal (5th Award), National Defense Service Medal 1 Oak Leaf Cluster, Vietnam Service Medal, Bronze Star Medal, Republic of Vietnam Campaign Medal w/60 Device, 6 Overseas Service Bars, Tech Service Medal 2 Clusters, Army Commendation Medal, and Meritorious Unit Commendation. During his time in the military, Philip was stationed at Fort Leonard Wood, Missouri several times over the years. During one of those times of duty, he met the love of his life, Patricia Ann Pasley at the 28 Truck Port of St. Robert where she was serving as waitress. They were united in marriage on December 18, 1980 in Rolla, Missouri and shared many wonderful memories. After retiring from the military, Philip cut and sold wood until his health began to decline. He had a garage at his home and worked as a mechanic on the side as well. In his spare time, Philip enjoyed going deer hunting and fishing. He liked to tinker with cars and was very talented and knowledgeable when it came to restoring old cars. He enjoyed visiting with his friends and had gained the nicknames “Frenchie” and “Sarge”. He was a member of the St. Robert VFW Post 3176. Most importantly, he enjoyed spending time with his family and friends. Philip passed away Monday, October 12, 2015 in his home having attained the age of 85 years. He will be sadly missed, but fondly remembered by all those that knew and loved him. Philip leaves to cherish his memory his wife, Patricia Michaud of the home; two sons: David DePuy of St. Robert, MO and Michael Michaud (LaDenna) of Purdy, MO; one sister: Marie Mae Conlogue of Waterville, ME; one sister-in-law: Ruth Michaud of Bristol, CT; one granddaughter: Faith Dotson; several step grandchildren and great step grandchildren; numerous nieces, nephews, other relatives and friends. In addition to his parents, Philip was preceded in death by one brother, Louis Michaud and one sister Sister Marie Albine Michaud (who served as a nun with the Catholic Church). Funeral services were held at 11:30 a.m. Friday, October 16, 2015 in the Memorial Chapels and Crematory of Waynesville / St. Robert with Pastor Bill O’Neal and Chaplain Lindy Hardwick officiating. The songs “Power in the Blood” by Lari White, “Amazing Grace” by Elvis and “Together Again” by Buck Owens were played. Serving as escorts were the United States Army and serving as honorary escorts were Dave Koonce, Bill Bloodgood, Larry Childers and Ernie Coverdell. Burial with military honors followed in the Missouri Veterans Cemetery of Waynesville. Military honors were provided by the United States Army of Fort Leonard Wood, Missouri. Memorial contributions may be made in memory of Philip Michaud and may be left at the funeral home.

MSG (Ret) Philip Joseph Michaud, son of the late Blone and Clara (Paradis) Michaud, was born August 9, 1930 in Madawaski, Maine where he grew up and attended school. As a young man, Philip moved to Louisiana and shortly thereafter in... View Obituary & Service Information

The family of MSG (Ret) Philip Joseph Michaud created this Life Tributes page to make it easy to share your memories.