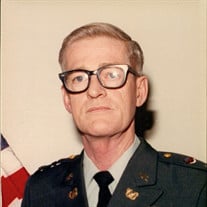 Phillip Omar Kerns, son of the late Glenn Ward and Clarice Gail (Miller) Kerns, was born October 20, 1940 in Bellefontaine, Ohio where he grew up and graduated from Bellefontaine High School. Phillip continued his education and graduated from Baylor University. On August 17, 1960, Phillip entered the United States Army and served his country faithfully for 30 years. During his time in the Army, he graduated from the first Physician Assistant Training, attained the rank of CW4, and earned several awards and commendations; some of which include: Legion of Merit, Meritorious Service Medal-3, Army Commendation Medal-3, Meritorious Unit Commendation, Army Good Conduct Medal-4, National Defense Service Medal-2, Vietnam Service Medal-2, Army Service Ribbon, Overseas Service Ribbon-5, Republic of Vietnam Civil Actions Medal Unit Citation, Republic of Vietnam Campaign Medal, Republic of Vietnam Gallantry Cross Unit Citation w/Palm, Expert Field Medical Badge, and Expert Qualification Badge M-16 Rifle. On October 30, 1991, Phillip was united in marriage to Mu Chen Hsu. They shared over 23 years of marriage together and many wonderful memories. After retiring from the military, Phillip was able to spend more time doing the things he enjoyed. He loved to spend time outdoors while fishing, gardening or treasure hunting with his metal detector. He also liked to research genealogy of his family line and he would spend hours doing the research. Phillip passed away Thursday, May 7, 2015 in his home having attained the age of 74 years. He will be sadly missed but fondly remembered by all those that knew and loved him. Phillip leaves to cherish his memory, his wife: Mu-Chen Kerns of the home; four children: Karen Kelly of Newport Beach, CA, George Kelly and wife Kiersten of Overland Park, KS, Lee Ann Evaro and husband Vic of the state of Virginia and Cameron Kerns and wife Jennifer of the state of Texas; seven grandchildren; two brothers, two sisters, and one brother-in-law all of the state of Ohio; several nieces, nephews, other relatives and friends. Graveside services were held at 2:00 p.m. Tuesday, May 12, 2015 in the Missouri Veterans Cemetery of Waynesville with military honors being provided by the United States Army of Fort Leonard Wood, Missouri. Services were under the direction of Memorial Chapels and Crematory of Waynesville / St. Robert. Memorial contributions may be made in memory of Phillip Kerns and may be left at the funeral home.

The family of CW4 (Ret) Phillip Omar Kerns created this Life Tributes page to make it easy to share your memories.