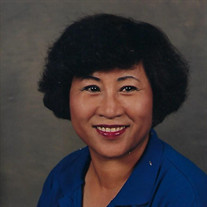 Pok Ki Smith, daughter of Kyong Sik Choe and Song Im (Kim) Choe, was born March 23, 1942 in South Korea. Pok Ki grew up in a little village south of Seoul during difficult years. She came to the United States in 1975 and began working as a seamstress for the military. She served for 27 years before retiring in 2007. During her spare time, Pok Ki enjoyed playing Bingo and Keno. She also loved her two cats, working with flowers, and listening to country music. She was a member of the VFW Ladies’ Auxiliary. On May 29, 1993, Pok Ki was united in marriage to Clarence Alton Smith in Waynesville, Missouri. They shared over 27 years of marriage together and many wonderful memories. Pok Ki’s family was very important to her. She loved Clarence dearly and was always looking for ways to help and provide for him. Pok Ki looked forward to having the family all together and spending time with them, especially the grandchildren. Pok Ki passed away Tuesday, December 29, 2020 in the University of Missouri Hospital in Columbia, Missouri having attained the age of 78 years. She will be sadly missed, but fondly remembered by all those that knew and loved her. Pok Ki leaves to cherish her memory, her husband, Clarence of the home; four daughters, Peggy Simoneaux (Bob) of Vienna, MO, Glenda Adams of Waynesville, MO, Janice Smith (Mark Vess) of Lebanon, MO, and Patricia Smith (Ronnie) of Waynesville, MO; eleven grandchildren and eighteen great-grandchildren; two brothers living in South Korea; a number of nieces and nephews; as well as a host of other relatives and friends. In addition to her parents, Pok Ki was preceded in death by one sister. Services were held at 2:00 p.m. Sunday, January 3, 2021 in the Memorial Chapels and Crematory of Waynesville / St. Robert with Pastor Richard Breeden officiating. The songs “Go Rest High on that Mountain” and “When I Get Where I’m Going” were played. Serving as escorts were Ronnie Morrison, Mark Vess, Andrew Vess, Ian Smith, Benjamin Portlock, and Raymond Shell. Burial followed in the Sunset Memoria Estates Cemetery of Waynesville. Memorial contributions in memory of Pok Ki Smith may be made and may be left at the funeral home.

The family of Pok Ki Smith created this Life Tributes page to make it easy to share your memories.