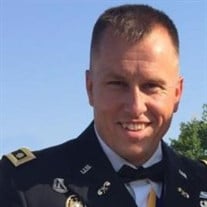 Randall Jeffrey Adams, son of William Lee Adams and Lucie Anne (Staples) Adams Trepanier, was born July 8, 1972 in Walla Walla, Washington. Randy, as he was known to his family and friends, grew up in the Northwest, graduating from high school near Auburn, Washington. He furthered his education and graduated from Andrews University in Berrien Springs, Michigan. While in the university, his father, Bill Adams, passed away. After graduating from Andrews University, Randy worked in a psych unit for troubled teenagers. He then enlisted in the United States Army and served his country faithfully for 22 years. He served first as an enlisted soldier and then as an officer. He began as a specialist and ended his enlistment four years later as an E-6. After OCS (Officers Candidate School), he began as a Second Lieutenant and ended his career as a Lieutenant Colonel. Some of his proudest moments was as a Commander of the 21st Chemical Company, the Warrior Transition Battalion (WTB-E) and when he was involved in writing doctrine for the Chemical Corps. He thoroughly enjoyed being a teacher and mentor at the BOLC (Basic Officers Leaders Course) and Captains Career Course while he was stationed at Ft. Leonard Wood. He valued his Army career even through three deployments to Iraq, and Afghanistan and four years in Germany. For his faithful service, LTC Adams received several awards and commendations. While in the Army, Randy continued studying and earned his Master’s Degree. Randy met a young lady by the name of Lori Kay Bretsch and they were united in marriage on August 9, 1996 in Clackamas, Oregon. They shared many wonderful memories and adventures together. Randy enjoyed being outdoors. You would find him either boating, playing golf, traveling in his RV with Lori and the kids, or playing a round of Frisbee golf in the air and sunshine. He loved going to movies with Lori and hated the COVID-19 for shutting down the theaters for months. He loved his family tremendously and treasured all the times they spent together. Randy had made a profession of faith earlier in his life and attended Discovery Church in Colorado Springs, Colorado. He attended Bible studies on a regular basis with friends and family. Randy went home to be with the Lord Saturday, October 31, 2020 while serving on active duty at Fort Carson, Colorado having attained the age of 48 years. He will be sadly missed, but fondly remembered by all those that knew and loved him. Randy leaves to cherish his memory, wife: Lori Adams of Newburg, MO; mother and stepfather: Lucie and James Trepanier of Woodland, WA; four children: Dameon Nanocchio of Rolla, MO, Gavin Adams of Colorado Springs, CO and Trevon Jackson and Aaliyah Adams, both of Newburg, MO; two brothers: Tony Adams (Shannon) of Camas, WA and Tim Adams of Oregon City, OR; father and mother-in-law: Bob and Beverly Bretsch of Las Cruces, NM; several nieces, nephews, other relatives and friends. Even though he is gone from our sight, we know that we will see him again one day! Services were held at 12:00 p.m. Friday, November 13, 2020 in the Westside Baptist Church Family Life Center of Waynesville with Chaplain (MAJ) Vincent Bain officiating. Gavin Adams and Bob Bretsch recalled their wonderful memories of Randy. The songs “I Will Be Here For You”, “Amazing Grace (My Chains Are Gone)”, “(Everything I Do) I Do It for You” were played. Pianist Karla Reel and violinist Kasondra Reel provided the prelude music. Serving as escorts were the United States Army. Burial with military honors followed in the Missouri Veterans Cemetery of Waynesville. Military honors were provided by the United States Army of Fort Leonard Wood, Missouri. Services were under the direction of Memorial Chapels and Crematory of Waynesville / St. Robert. Memorial contributions may be made in memory of LTC Adams and may be left at Memorial Chapels and Crematory of Waynesville / St. Robert.

Randall Jeffrey Adams, son of William Lee Adams and Lucie Anne (Staples) Adams Trepanier, was born July 8, 1972 in Walla Walla, Washington. Randy, as he was known to his family and friends, grew up in the Northwest, graduating from high... View Obituary & Service Information

The family of LTC Randall Jeffrey Adams created this Life Tributes page to make it easy to share your memories.