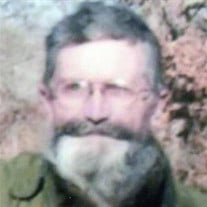 Randall Ralph “Randy” Hutson, son of the late Ralph Calvert and Dorothy Ellen (Turner) Hutson, was born November 17, 1951 in Springfield, Missouri. He passed away Friday, September 26, 2014 at his home in Richland, Missouri. Randy graduated from high school on May 21, 1970. While in the process of going to architecture school, Randy decided he would join the US Navy. He had received a draft lottery number that would all but guarantee he would be drafted and joining the Navy was his way of still having some control of the situation. Randy attended boot camp in Great Lakes, Illinois and after graduating from boot camp, he was privileged to visit the Acropolis of Lindos in Athens, Greece. Randy was a very highly skilled craftsman, mechanic, and artist. His brother, Tim, recalls a time when Randy retrieved several boards from a pile of scrap lumber. He had an idea. He free handed onto the scrap boards the outline of a P-40 War-Hawk (a WWII fighter aircraft). The hand saw Randy tried to use to cut out the plane was very dull and rusty so he asked some nearby carpenters if they would cut it out with their electric skill saws. The carpenters were reluctant at first but after they had cut out some of the main parts from the outlines in the wood, it now took the distinct form of a WWII fighter. Although he was about 10-11 years old at the time, Randy had the vision to take scrap wood and turn it into a miniature replica of the aircraft. Randy’s outlook on life was seeing value in things others may look on as junk. He was also a very talented welder. He could weld on aluminum at the boat factory that looked like a roll of dimes laid on their side like a machine had completed it. To a person without steady hands and skills it was difficult, but to Randy it was all in a day’s work. Randy was also very resourceful. He and Tim were both stationed in the Navy near Jacksonville, Florida in the early 1970s and they were on a motorcycle headed to Gainesville to see some drag races. While on their way, Randy saw a family on the side of the road pulling a small pop-up style camper that had a flat tire. Randy pulled over to offer assistance to the family. The dad of the family said thanks but no thanks as what they needed was a lug wrench to remove the flat tire on the camper. The motorcycle Randy and Tim were on had no tools but did have a spark plug wrench, which Randy used to remove the old tire from the camper and install the spare tire. The dad tried to pay Randy for his work but he refused any pay. Randy was always ready to help anyone even with limited resources. Randy was very intelligent in ways people may not understand. Tim states that he lost every game of Risk and Chess that he ever played with Randy. But he misses competing with Randy even though it would mean getting beat. Randy passed away Friday, September 26, 2014 in his home having attained the age of 62 years, 10 months and 11 days. Randy leaves to cherish his memory, his son: Anthony Hutson of Jefferson City, Missouri; one brother: Tim Hutson of Pace, Florida; other relatives and friends. Even though he is gone from our sight, his memory will live on in our hearts. Memorial services were held at 10:00 a.m. Saturday, November 8, 2014 in the Cornerstone Baptist Church of Richland with Pastor Chuck Baker officiating. The songs “Precious Memories” and “Amazing Grace-My Chains Are Gone” were played. Services were under the direction of Memorial Chapel of Richland. Graveside services with military honors were held at 3:00 p.m. Saturday, November 8, 2014 in the Turners Cemetery of Turners, Missouri with Chaplain (Ret) Don Skyles officiating. Services were under the direction of Memorial Chapel of Richland.

The family of Randall Ralph Hutson created this Life Tributes page to make it easy to share your memories.