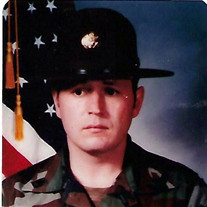 Randy Allen Richards, son of the late Vernon Leslie Richards and Nancy Lee Gibbo, was born December 27, 1955 in Malone, New York. Until the age of 17, Randy grew up between Malone and Palmyra, Virginia (which is located at the bottom of what is known as Walton’s Mountain). It was always Randy’s desire to serve his country as a Marine, so at the age of 17, he enlisted in the United States Marines and served his country for four years. He served in Iwo Jima, Japan and also did some ship time, but for 2 ½ years he served as a recon sniper. He earned the National Defense Service Medal, Good Conduct Medal and Rifle Expert Badge (2nd Award) and had attained the rank of Corporal. After his honorable discharge from the Marines, he entered the United States Army and served his country faithfully until 1994 when he retired after 18 years. He had attained the rank of Sergeant First Class and earned several awards and commendations; some of which include: Army Commendation Medal, Army Achievement Medal, Marine Corps Good Conduct Medal, Army Good Conduct Medal 5th Award, National Defense Service Medal 2nd Award, NCO Professional Development Ribbon w/Numeral 3, Army Service Ribbon, Overseas Service Ribbon 3rd Award, Expert Qualification Badge M016 Rifle, and Expert Qualification Badge 45 Caliber Pistol. On November 10, 1973, Randy was united in marriage to Melody Ann Baumgart in Grove Hill, Alabama. They shared over 45 years of marriage together and were blessed with two children: Torey and RJ. For a brief time after retiring from the military, Randy worked for his friend John Courtois Trucking of Dixon and then as a prison guard in Jefferson City for a year. He continued serving his country on Fort Leonard Wood as a Department of Defense employee. He worked for Humanitarian Demining Services as an instructor for Land Mine Warfare (IED). He was very valuable to the organization and wrote the manual that was used until 2015. He went to the different countries of Georgia, France, England, Germany, Australia and Italy to help with different organizations. Randy loved to travel all over the United States, particularly on his motorcycle. He enjoyed looking at the different scenery across the country and was never in a hurry to get to any particular destination. He was also very talented in making knives. He could make knives out of all different kinds of material. Randy was an old fashioned guy and unless he used them for work, he did not use a cell phone, internet or social media. He relied on communicating with his family and friends through landline phones or face to face encounters. His family was everything to him. He loved them and his friends and if you happened to be in his inner circle, he would give you the shirt off of his back. He always kept his family and friends close and was willing to lay down his life for them if need be. Randy passed away Tuesday, August 27, 2019 in the Cox Medical Center South of Springfield, Missouri having attained the age of 63 years. He will be sadly missed, but fondly remembered by all those who knew and loved him. Randy leaves to cherish his memory his wife: Melody A. Richards of Richland, MO; two children: Torey Gulledge (Josh) of Rolla, MO and RJ Richards (Melissa) of Lebanon, MO; four grandchildren: Char Mann (Nick) of Waynesville, MO, Devin Gulledge (Ciara) of Wright-Patterson Air Force Base, OH, and Abby and Dessy Richards, both of Lebanon, MO; one great grandchildren: Bentley Gulledge; one brother: Ronnie Richards (Cathy) of Raleigh, NC; two sisters: Renia Ricks of Constable, NY and Kelly Miller of Malone, NY; several nieces, nephews, other relatives and friends. In addition to his parents, Randy was preceded in death by his cousin, Darlene (LaGrave) who was like a sister to him. Even though he is gone from our sight, his memory will live on in our hearts forever. Services were held at 12:00 p.m. Friday, August 30, 2019 in the Memorial Chapels and Crematory of Waynesville / St. Robert with Pastor Kevin Ranfeld officiating. The songs “I Can Only Imagine”, “You’ll Never Walk Alone” and “Blue Ain’t Your Color” were played. Serving as escorts were the United States Army and serving as honorary escorts were Ronnie Richards, RJ Richards, Devin Gulledge, Roger Deagon, Shawn Deagon, Jay Glover, Duke Neighbors, Josh Gulledge, John Courtois and Nick Mann. Burial with full military honors followed in the Missouri Veterans Cemetery of Waynesville. Military honors were provided by the United States Army of Fort Leonard Wood, Missouri.

Randy Allen Richards, son of the late Vernon Leslie Richards and Nancy Lee Gibbo, was born December 27, 1955 in Malone, New York. Until the age of 17, Randy grew up between Malone and Palmyra, Virginia (which is located at the bottom of what... View Obituary & Service Information

The family of SFC (Ret) Randy Allen Richards created this Life Tributes page to make it easy to share your memories.