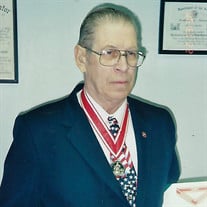 Rayburn Walter Toy, son of the late Raymond Walter and Geneva Olive (Bailey) Toy, was born October 21, 1942 in Kittanning, Pennsylvania. He passed away Thursday, May 23, 2019 in his home in Union, Missouri having attained the age of 76 years. Rayburn grew up in Kittanning where he went to West Kittanning Elementary School and graduated from Kittanning High School with the Class of 1960. Shortly after graduation, Rayburn entered the United States Army and served his country faithfully until his retirement after 22 years of service. While in the military, Rayburn served four tours of duty in Vietnam and was part of the Rome Plow Unit, 31st Engineers Light Brigade, 568 Engineer Company. He was a drill sergeant and at the time of his retirement, he had attained the rank of First Sergeant. For his faithful service, Rayburn earned several awards and commendations; some of which include: De Fleury Medal, National defense Service Medal, Vietnam Service Medal, Vietnam Campaign Medal, Overseas Service Bars (8), Driver Badge, Bronze Star Medal, Meritorious Unit Citation, Good Conduct Medal (7), Army Commendation Medal and the Vietnam Cross of Gallantry with Palm. After his retirement from the military, Rayburn continued serving his country as a civil service employee for 18 years. He served as a supervisor in the Chief Collective Training Division and the Engineer Collective Training Branch. For several years after his retirement from civil service, Rayburn operated a welding shop out of his home and enjoyed getting to visit with his customers. On July 3, 1978 in Winchester, Virginia, Rayburn was united in marriage to Donna Lou Simcik. They shared over 40 years of marriage together and six children: Shawn, Brian, Kelly, Molly, John and Kevin. After retiring from the military and civil service, Rayburn was able to do a lot more of the things he enjoyed. He loved being outdoors watching nature or hunting and fishing. In his younger years during high school, he enjoyed running heavy equipment. Rayburn was a member of the American Legion, Veterans of Foreign Wars (VFW), Disable American Veterans (DAV) and the Engineer Association. Most importantly, he loved spending time with his family, especially his grandchildren. Rayburn leaves to cherish his memory, his wife: Donna Toy of the home; six children: Shawn Toy (Holly Day) of Barnhart, MO, Brian Toy (Ilda Nobrega) of Olathe, KS, Kelly Wright (John) of Hillsboro, MO, Molly Proost (Dan) of Wildwood, MO, John Toy of Bismark, MO and Kevin Chestnut (Melissa) of Fenton, MO; eleven grandchildren: Jacob Toy, Joshua Toy, Kasey Toy, Kelsi Toy, Caleb Toy, Desiree Hartmann (Daniel), Kaitlynn Wright, Connor Wright, Cassidy Proost, Ryan Proost and Aurora Chestnut; several nieces, nephews, other relatives and friends. Even though he is gone from our sight, Rayburn’s memory will live on in our hearts forever. Funeral services were held at 10:00 a.m. Wednesday, May 29, 2019 in the Memorial Chapels and Crematory of Waynesville / St. Robert with Chaplain (CPT) Ariel Castillo officiating. The songs “Old Rugged Cross”, “In the Garden” and “Amazing Grace” were played. Burial with military honors followed in the Missouri Veterans Cemetery of Waynesville. Military honors were provided by the United States Army of Fort Leonard Wood, Missouri. Memorial contributions may be made in memory of Rayburn Toy and may be left at the funeral home.

Rayburn Walter Toy, son of the late Raymond Walter and Geneva Olive (Bailey) Toy, was born October 21, 1942 in Kittanning, Pennsylvania. He passed away Thursday, May 23, 2019 in his home in Union, Missouri having attained the age of 76 years.... View Obituary & Service Information

The family of 1SG (Ret) Rayburn Walter Toy created this Life Tributes page to make it easy to share your memories.