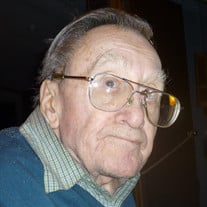 Raymond William Anderson, son of the late Raymond M. and Mabel Catherine (Meurer) Anderson, was born August 23, 1928 in Minneapolis, Minnesota where he grew up and attended school. Ray entered the Army National Guard and was activated due to the Korean Conflict. He served his country faithfully and was honorably discharged in 1952. Over several years, Ray moved between Minnesota and Missouri and during this time he met and married Rubye Nadine Toops on September 29, 1951 in Waynesville, Missouri. They shared over 66 years of marriage together and were blessed with five children: Lanning Reed, Terry Lee, Mark Alan, Robyn Lynette, and Cynthia Rochelle. While living in Minnesota, Ray worked for KMSP Channel 9, WCCO Channel 4 and WTCN Channel 11 as a photographer and video production. They settled back in the Waynesville area in 1981 and decided to stay. Ray was a very talented photographer and worked for KOLR 10 in Springfield as a photographer and videographer for many years. In his spare time, Ray enjoyed collecting model cars, all makes and models. He loved cars and was always looking for a model he didn’t have. He loved being outdoors; whether it was going to the lake or caring for his yard. Ray was a member of the Civil Air Patrol. Ray passed away Saturday, March 24, 2018 in the Lebanon South Nursing & Rehab of Lebanon, Missouri having attained the age of 89 years. He will be sadly missed, but fondly remembered by all those that knew and loved him. Ray leaves to cherish his memory, his wife, Nadine Anderson of the home; four children: Lanning Reed Anderson (Cyndi) of Williamsburg, VA, Terry Lee Anderson (Janet) of Springdale, AR, Mark Alan Anderson (Dawn) of Richland, MO and Robyn Lynette Cruser (David) of Johnsonburg, PA; nine grandchildren; fourteen great grandchildren; several nieces, nephews, other relatives and friends. In addition to his parents, Ray was preceded in death by one daughter: Cynthia Rochelle Anderson; and one brother: Dick Anderson. Graveside services with military honors were held at 2:00 p.m. Monday, April 9, 2018 in the Missouri Veterans Cemetery of Waynesville, Missouri with Paul Possey officiating. Military honors were provided by the Missouri Honors Team. Services were under the direction of Memorial Chapels and Crematory of Waynesville / St. Robert. Memorial contributions may be made in memory of Raymond Anderson and may be left at the funeral home.

Raymond William Anderson, son of the late Raymond M. and Mabel Catherine (Meurer) Anderson, was born August 23, 1928 in Minneapolis, Minnesota where he grew up and attended school. Ray entered the Army National Guard and was activated... View Obituary & Service Information

The family of Raymond William Anderson created this Life Tributes page to make it easy to share your memories.