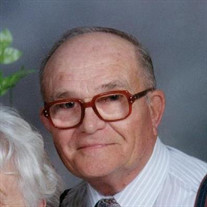 SFC (Ret) Raymond Charles Dudek, son of Stanley and Wanda (Konratowicz) Dudek, was born July 24, 1924, in the Cook County Hospital in Chicago, IL. He departed this life Friday June 5, 2015, in the Missouri Veteran’s Home, in St. James, Missouri, after an extended battle with Alzheimer’s disease, at the age of ninety years, ten months and eleven days. Raymond grew up in Chicago Illinois. On March 2, 1957, in New York, he was united in marriage to Gertrud Barbara Klupfel, who preceded him in death on Dec. 12, 2013. Raymond and Gertrud shared over 58 years of marriage. He was also preceded in death by his parents, a brother, Edward Dudek, during WWII, and a sister, Lorraine Dudek. Raymond is survived by his son, Edward Dudek and spouse Lisa of Columbia, MO; his two daughters, Sylvia Clayton and husband Kenneth of Springfield, MO and Lorraine Brady and husband Richard of Roach, MO; five grandchildren, Matthew Clayton, Sean Brady, Connor Brady, Garret Dudek and Cole Dudek; a step grand-daughter Cynthia Brady Muehlberger; a great-grandson, Brody Clayton; and a host of other relatives and friends. He devoted his life to his family and retired from the United States Army with twenty-two years of service, on January 1, 1968 at Fort Hamilton, New York, by Major General Ken G. Wickham. He then began a second career in civil service at Fort Leonard Wood, where he drove the sick or injured military personal by ambulance to the General Leonard Wood Army Community Hospital and retired in 1991. In his spare time he enjoyed going to Cardinal baseball games with his son, reading, and watching the wildlife at the Fort Leonard Wood Recreation Center at the lake. Raymond will be remembered for his honorable service in the military and his unending love for his family. Our hearts will hold special memories of him. Mass of Christian Burial was held at 10:00 a.m. Monday, June 8, 2015 in the St. Robert Bellarmine Catholic Church of St. Robert, Missouri with Father John Groner officiating. Organist Evelyn Horine accompanied the congregation as they sang the responses as well as sang “Ave Maria” and “On Eagle’s Wings”. Serving as escorts were the United States Army. Burial with military honors followed in the Resurrection Cemetery of St. Robert, Missouri. Military honors were provided by the United States Army of Fort Leonard Wood, Missouri. Services were under the direction of Memorial Chapels and Crematory of Waynesville / St. Robert. Memorial contributions can be made to Alzheimer’s Association or the American Heart Association, and contributions can be left at the funeral home.

The family of SFC (Ret) Raymond Charles Dudek created this Life Tributes page to make it easy to share your memories.