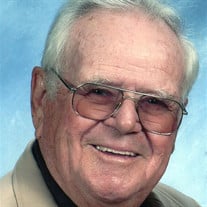 Rev. Pryor Ray Prewett, son of the late Pryor Harrison and Anna Belle (Waller) Prewett, was born September 16, 1925 in Carthage, Missouri. As a small child, Pryor Ray and the family moved to Dixon, Missouri where he grew up and attended grade school. During Pryor Ray’s high school years, the family moved to Richland, Missouri and it was there that he met his high school sweetheart, Eunice Mae Crick. They were wed on July 22, 1943 in Waynesville, Missouri and shared the next 71 years of marriage together. Pryor Ray and Mae were blessed with two children, Johnny Ray and Tamarah. On May 21, 1943, Pryor Ray entered the United States Navy and served his country faithfully until his honorable discharge in 1947. In 1948 while on the Gasconade River under the Hwy 133 bridge, the Lord spoke to Pryor Ray and he accepted Jesus Christ as his Lord and Savior. That September, Pryor Ray was baptized in Sellers Creek by Bro. J.O. Brown. In 1951, Pryor Ray surrendered to the call to preach the Gospel. After he was ordained by First Baptist Church of Richland, he pastored several churches in this area - Deerlick, Swedeborg, Pisgah and Eureka. He was used greatly by God to bring people to Him and to help Christians to have a deeper walk with God. Pryor Ray was a bi-vocational pastor and served as a higher level Math teacher in the Richland School System for 30+ years. As stated by one of his former students, “the way he tied algebraic rules to Creation was inspirational. He was a man of God first and math teacher a close second. The generations that did not have the opportunity to experience him in class missed out. Those of us that had the privilege will be forever blessed and will miss the man of math”. He made an impression on his students and they respect him to this day. In his spare time, Pryor Ray liked being outdoors enjoying God’s nature. He loved to hunt, fish, trap, raise chickens and work in his vegetable garden. If you were to ask him what he had been up to, you would probably hear a story or two about what he had just trapped or caught while on the river. Pryor Ray loved his family and loved spending time with them. He was proud of every accomplishment they obtained, but his true love for the Lord was evident in the way that he treated his family. He was a great man and will be greatly missed. Pryor Ray went home to be with his Lord Sunday, October 26, 2014 in the Lake Regional Hospital, Osage Beach, Missouri having attained the age of 89 years, 1 month and 10 days Pryor Ray leaves to cherish his memory, his wife, Mae of the home; two children: Johnny Ray Prewett and his wife, Margaret of Richland, MO and Tamarah Newell and her husband, Richard of Richland, MO; 2 grandchildren: Travis Prewett and his wife Olivia of Richland, MO, and Kasie Lercher and her husband, Brock of Richland, MO; 2 great grandchildren: Brooklynn Lercher and Sylvia Prewett; one sister: Berneice Brackett of Richland, MO; a number of nieces, nephews, and a host of other relatives and friends. Known for his ability to love and care deeply for those in his life, Pryor Ray’s memory will be carried on through stories and laughter that will not easily be forgotten. Funeral services were held at 11:00 a.m., Friday, October 26, 2014 in the First Baptist Church of Richland with Rev. Bob Lilly and Rev. Doug Jacobsen officiating. Soloist Charla Baker sang "At Calvary" and "One Day At A Time." Serving as escorts were Mike Keelling, Troy York, Mark Tallant, Jim Stoumbaugh, James Newell and Don Newell. Honorary escorts included Cleamont Sheeley, Bill Coffman and Tim Hardesty. Burial followed in the Oaklawn Cemetery of Richland, MO. In lieu of flowers memorial contributions may be made in memory of Rev. Pryor Ray Prewett to the Backpack Children’s Ministry, or The World Hunger Program, through the Eureka Baptist Church, and may be left at the Memorial Chapel of Richland. Online condolences may be left at www.richlandmemorialchapel.com

Rev. Pryor Ray Prewett, son of the late Pryor Harrison and Anna Belle (Waller) Prewett, was born September 16, 1925 in Carthage, Missouri. As a small child, Pryor Ray and the family moved to Dixon, Missouri where he grew up and attended grade... View Obituary & Service Information

The family of Rev. Pryor Ray Prewett created this Life Tributes page to make it easy to share your memories.