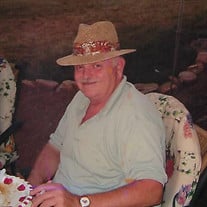 MSG (Ret) Richard Neil Hornbrook, son of the late Augusta and Elizabeth (Clark) Hornbrook, was born April 22, 1940 in St. Stephens, New Brunswick, Canada. He passed away Friday, August 16, 2019 in the General Leonard Wood Army Community Hospital of Fort Leonard Wood, Missouri having attained the age of 79 years. For most of his growing up years, Richard and his family lived in Maine, but while in high school, they moved to Boston where he graduated from high school. Shortly after graduation, Richard entered the United States Army and served his country faithfully until his retirement in 1990 after 30 years of service. He had attained the rank of Master Sergeant and for his faithful service, he earned several awards and commendations; some of which include: National Defense Service Medal, Noncommissioned Officer Professional development Ribbon, Army Commendation Medal-2, Army Service Ribbon, Overseas Service Ribbon-4, Vietnam Service Medal, Vietnam Campaign Medal, Army Good Conduct Medal-9, Republic of Vietnam Cross of Gallantry (Unit), Republic of Vietnam Cross of Gallantry w/Palm (Unit), Mechanic Badge, and Expert Qualification Badge M-16 Rifle. On November 22, 1963, Richard was united in marriage to Rosalinde Helen Brunner in Germany. They shared over 55 years of marriage together and were blessed with three children: Petra, David and Larry. In 1980, Richard and the family were transferred to Fort Leonard Wood and after his retirement in 1990, they decided to stay in the area. After retirement, Richard able to do more of the things he enjoyed. He liked to bowl and enjoyed giving bowling lessons to kids at Fort Leonard Wood. He enjoyed restoring cars and just working on cars in general. He was a member of the American Legion. Most importantly, he loved to spend time with his family and friends. Richard will be sadly missed, but fondly remembered by all those who knew and loved him. He leaves to cherish his memory his wife: Rosalinde Hornbrook of Waynesville, MO; one daughter: Petra Payne (Bob) of Winston Salem, NC; two sons: David Hornbrook of St. Robert, MO and Larry Hornbrook (Mollie) of Bethlehem, PA; three grandchildren: Blake Hornbrook of Clarksville, TN, Brandon Payne of Winston-Salem, NC and Michael Hornbrook of Bethlehem, PA; two great grandchildren: Khole Payne and Harper Hornbrook; other relatives and friends. In addition to his parents, Richard was preceded in death by an infant brother. Graveside services with military honors were held at 10:00 a.m. Wednesday, August 21, 2019 in the Missouri Veterans Cemetery of Waynesville, Missouri with Chaplain (CPT) Thomas Robinson officiating. Military honors were provided by the United States Army of Fort Leonard Wood, Missouri. Services were under the direction of Memorial Chapels and Crematory of Waynesville / St. Robert.

The family of MSG (Ret) Richard Neil Hornbrook created this Life Tributes page to make it easy to share your memories.