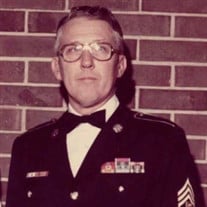 Richard L. Layman, Sr., one of nine children born to the union of the late Robert and Edith (Thomas) Layman, was born October 9, 1928 in Terre Haute, Indiana. He passed away Thursday, January 18, 2018 in the Mercy Hospital of Lebanon, Missouri having attained the age of 89 years. Richard grew up in Terre Haute and attended school. On April 14, 1945, Richard was united in marriage to Rosa Mae Fitzsimmons. They were blessed with three children: Richard Jr., Donna and Belinda. Rosa preceded Richard in death on May 6, 2012 after 67 years of marriage. At the age of 19, Richard entered the United States Army and served his country faithfully until his retirement in 1977 after 30 years of service. At the time of his retirement, he was serving as the Post Command Sergeant Major at Fort Leonard Wood, Missouri. For his faithful service, Richard earned several awards and commendations; some of which include: Legion of Merit and the Bronze Star, Korean Service Medal, United Nations Service Medal, National Defense Service Medal w/Oak Leaf Cluster, Army Commendation Medal w/2 Oak Leaf Clusters, Armed Forces Expeditionary Medal, Vietnam Service Medal, Republic of Vietnam Campaign Medal w/60 Device, Vietnam Service Medal w/4 Overseas Service Bars and Good Conduct Medal (7th Award). After retiring from the military, Richard managed City National Savings and Loan for several years. In his spare time, he was a member of the Waynesville Masonic Lodge #375 AF & AM and also the Ft. Wood Shrine Club. Richard loved his family deeply and lived every moment for them. He was always looking for ways to make their lives richer and to show them how much he cared for them. He looked forward to every moment they could spend together, especially when it came to his grandchildren. Richard will be sadly missed, but fondly remembered by all those that knew and loved him. He leaves to cherish his memory, his son, Richard Layman, Jr. (Monica) of Honolulu, HI; two daughters, Donna Abril of Honolulu, HI and Belinda Layman O’Neill (Nick) of Cumming, GA; four grandchildren, Debbie Wilcox (Keoni), Alaine Reynolds (Mark), Alan Abril, all of Honolulu, HI and Jessica Laverde (Jaime) of Ellijay, GA; six great-grandchildren, Ryan Wilcox, Maeva and Teva Reynolds, Sydney and Ally Laverde, and Reagan Rose Laverde; his brother, Bill Layman (Val) of Pensacola, FL; a number of nieces and nephews; as well as a host of other relatives and friends. In addition to his parents and wife, Richard was preceded in death by six brothers and one sister. Services were held at 1:00 p.m. Tuesday, January 23, 2018 in the Memorial Chapels and Crematory of Waynesville / St. Robert with Chaplain (CPT) Courtney Merchant officiating. The songs “Amazing Grace”, “The Old Rugged Cross”, and “You Raise Me Up” were played during the service. Serving as escorts were the United States Army. Burial with military honors followed in the Missouri Veterans Cemetery of Waynesville. Military honors were provided by the United States Army of Fort Leonard Wood, Missouri.

Richard L. Layman, Sr., one of nine children born to the union of the late Robert and Edith (Thomas) Layman, was born October 9, 1928 in Terre Haute, Indiana. He passed away Thursday, January 18, 2018 in the Mercy Hospital of Lebanon, Missouri... View Obituary & Service Information

The family of CSM (Ret) Richard L. Layman Sr. created this Life Tributes page to make it easy to share your memories.

Richard L. Layman, Sr., one of nine children born to the union...