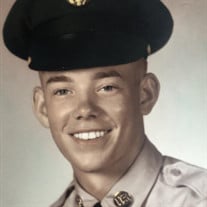 Richard Charles Mabrey, son of the late Charles Page and Rosemary (Vaught) Mabrey, was born June 5, 1948 in Topeka, Kansas. He passed away Wednesday, April 24, 2019 in the Lake Regional Hospital of Osage Beach, Missouri having attained the age of 70 years. Richard grew up in the Gardner, Kansas area where he attended school. At the age of 17, Richard entered the United States Army and served his country faithfully with the 7th Infantry 32nd Division until his medical discharge in 1971. He was very proud of his military service. After his discharge from the military, Richard moved to Minnesota for a few years where he owned and operated a couple of gas stations. He later returned to Kansas where he did some farming and owned and operated a few businesses. In 2000, Richard retired and moved to the Lake Ozark area where he was able to do more of the things he enjoyed. Richard loved being on the lake and enjoyed boating, skydiving, traveling, riding Harley Davidsons and the great outdoors. He was a ham radio operator and liked to work on cars. He was also very talented musically. He played guitar with a few of the bands that had played at his ET’s Private Club in Edgerton, KS. Richard was a lifetime member of the American Legion and the Disabled American Veterans. On June 16, 2012, Richard was united in marriage to Debbie Diane Knowles in Sunrise Beach, Missouri. They shared over six years of marriage together and ten years of wonderful memories. Richard leaves to cherish his memory, his wife, Debbie of the home; five children, Michael Mabrey of Edgerton, KS, David Mabrey of Salina, KS, Brad Hontz (Jessica) of Olathe, KS, Michelle Kenyon of North Kansas City, MO, and Ashley Thornbrugh (T.J.) of Shawnee, KS; ten grandchildren, Makenzie, Dylan, Haley, Caleb, Kylee, Austin, Courtney, Cameron, Colton, and Charleigh; his sister, Susan Wallace (Raymond) Collierville, TN; two nephews; his two canine companions, Bugs and Gizmo; as well as a host of other relatives and friends. In addition to his parents, Richard was preceded in death by one daughter: Laurie Elaine Mabrey. Funeral services were held at 1:00 p.m. Wednesday, May 1, 2019 in the Memorial Chapels and Crematory of Waynesville / St. Robert with Chaplain (CPT) Lelys Miller officiating. The songs “One Hell of an Amen” by Brantley Gilbert, “Stuck with You” by Huey Lewis, “Live Like You Were Dying” by Tim McGraw and “Jealous of the Angels” by Donna Taggart were played. Serving as escorts were Rob Laquet, David Holy, Raymond Wallace, Steve Walsh, Rick Pierson and Jason Mullins. Serving as honorary escort was David Martin. Burial with military honors followed in the Missouri Veterans Cemetery of Waynesville. Military honors were provided by the United States Army of Fort Leonard Wood, Missouri. Memorial contributions may be made in memory of Richard Mabrey and may be left at the funeral home.

Richard Charles Mabrey, son of the late Charles Page and Rosemary (Vaught) Mabrey, was born June 5, 1948 in Topeka, Kansas. He passed away Wednesday, April 24, 2019 in the Lake Regional Hospital of Osage Beach, Missouri having attained the... View Obituary & Service Information

The family of Richard Charles Mabrey created this Life Tributes page to make it easy to share your memories.