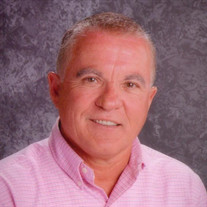 Richard Wayne McKinnon, son of the late James Andrew and Nancy Evelena (Ashworth) McKinnon, was born August 6, 1956 in Waynesville, Missouri. He spent the majority of his growing up years in the Waynesville / St. Robert area and attended West School, Junior High and graduated from Waynesville High School. On November 29, 1991 in Rolla, Missouri, Richard was united in marriage to Kristie Lynn Gillett. They shared over 23 years of marriage together and many wonderful memories. Upon their marriage, two families were blended and Richard and Kristie shared three children: Richie, Melissa and Nickie. Richard was a hardworking and faithful employee of the Waynesville R-VI School District and was currently in his 31st year with the school district. He served in the maintenance department and was the Director of Facilities and Maintenance, and Safety Advisor. In his spare time, Richard enjoyed anything with wheels and a motor which included classic cars, motorcycles and NASCAR. He also loved to work on the family farm and be outdoors. He was an avid St. Louis Cardinal fan and even more than that, he loved anything Waynesville Tigers. Most importantly, Richard loved his family dearly and spending time with them was the highlight of every day. He enjoyed talking on the phone with his family and friends. Richard was a member of the Masonic Lodge and the Shriners and also served on the Bank Board for the Security Bank of Pulaski County. At an early age, Richard made a profession of faith and he was a member of the Westside Baptist Church. In the last few months of his life, Richard enjoyed listening to the services by phone when he was not able to attend. Richard went home to be with his Lord Tuesday, June 2, 2015 in the Barnes Jewish Hospital of St. Louis, Missouri after a hard fought battle with leukemia. He will be sadly missed, but fondly remembered by all those that knew and loved him. Richard leaves to cherish his memory, his wife: Kristie McKinnon of Waynesville, MO; three children: Richie McKinnon (Tanya Richey) of St. Robert, MO, Melissa Vernon (Brian) of Waynesville, MO and Nickie McKinnon of Waynesville, MO; five grandchildren: Richie McKinnon, Davin Vernon, Dailey Vernon, Caleb Jefferies and Kinsley McKinnon; several nieces, nephews, other relatives and friends. In addition to his parents, Richard was preceded in death by one brother, Wesley McKinnon. Funeral services were held at 10:00 a.m. Friday, June 5, 2015 in the Westside Baptist Church of Waynesville with Pastor John Shaw and Pastor Lindell Shelden officiating. Pianist Renita DeMalade accompanied Mike Freeman as he sang “Near the Cross”, “How Great Thou Art” and “Til the Storm Passes By”. Serving as escorts were Mike Dunbar, Scott Hubbard, Keith Pritchard, Kevin Pritchard, Terry Shultz, Jim Utt and Darrel Vaughan. Burial followed in the Waynesville Memorial Park Cemetery. Services were under the direction of Memorial Chapels and Crematory of Waynesville / St. Robert. Memorial contributions may be made in memory of Richard McKinnon to the Muscular Dystrophy Association and may be left at the funeral home.

Richard Wayne McKinnon, son of the late James Andrew and Nancy Evelena (Ashworth) McKinnon, was born August 6, 1956 in Waynesville, Missouri. He spent the majority of his growing up years in the Waynesville / St. Robert area and attended West... View Obituary & Service Information

The family of Richard Wayne McKinnon created this Life Tributes page to make it easy to share your memories.