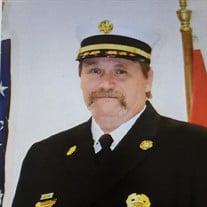 Rickey Lee Hobbs, 60, of Richland, Missouri passed away surrounded by his loving family Tuesday, September 14, 2021, at Lake Regional Health Center, Osage Beach, Missouri. “Rick” was born in Waynesville, Missouri on December 17, 1960, the son of Francis Junior Hobbs and the late Bonnie June (Boren) Hobbs Fritts. After Rick was born, the family moved to Richland where he attended school, living out his life…and what a full life Rick experienced. He attended the Church of Christ and accepted Christ at a young age and was later baptized by his uncle James Boren in the Gasconade River. On June 6, 1980, in Richland, Rick married his soul mate, Robin Lynn Helms. They shared over forty-one years of love, laughter, tears, and joy together while proudly raising their son, Russell, who they dearly loved and adored. Rick had a wonderful work ethic and began working early in life at such places as, Independent Stave, Ozark Fisheries, and H. E. Builds Gate, he also served as a Sergeant with Richland Police Department later working as a lineman for the City of Richland. He served as an EMT and became a Pulaski County Board Member. In 1980 Rick started doing what he loved most, Fire Service. Rick became a member of the Fire Fighter Association of Missouri, he was the President and Founding Member of the Pulaski, and Laclede County Fire Chiefs Association, and was the Emergency Management Director for the City of Richland, he was on the Pulaski County Ambulance Board for a term and was involved in the University of Missouri’s Fire School Expo. These are just a few things Rick was involved with, and if truth be known, there are many more that could be listed. Rick always had his finger on the pulse, and made his mark on the world, always looking for ways to help in the communities he loved and served. Other things Rick enjoyed doing included showing horses, rodeos, working on his golf cart, and 9N Ford Tractors. Rick greatly loved his family. They were his true treasures in life, especially his beautiful granddaughters Nadia and Alaina, they were Poppy’s pride and joy. He was pre-deceased by his mother, “Junie,” one infant grandchild, his father-in-law, John R. Helms, three brother-in-law’s, Russell Edward Helms, Aaron Helms, and David Helms, and one Uncle Don Mayhew. Rick is survived by his loving wife, Robin of their home in Richland, MO; his son: Russell Hobbs (Danielle) of Richland, MO; 2 grandchildren: Nadia and Alaina Hobbs; his father Francis Hobbs of Richland, MO; brothers: Francis Eugene Hobbs (Doris) of Climax, MO, and Tim Farmer (Kelly) of Hendersonville, TN; sisters: Holly Joy Hobbs (Travis), Sue Pentecost, and Dalene McDaniel (Kenneth), all of Richland, MO; mother-in-law: Nancy Helms of Warsaw, MO; sister-in-law: Irene Handley (John) of Avon Park, FL; brother-in-law: John Fluty (Shamane) of Warsaw, MO; one aunt: Dorothy Mayhew of Crocker, MO; one uncle: James Boren (Sue) of Swedeborg, MO; his greatly loved fire family, his brothers and sisters; nieces, nephews and other relatives and friends. Our community was greatly blessed to have such a man as Rick who truly did have a servant’s heart. His devotion and dedication were unmatched. Though he may be gone from our sight, Rick Hobbs’s legacy will live on forever, so remember him with a smile. Services were held at 2:00 p.m., Sunday, September 19, 2021, in the RHS Gymnasium of Richland, Missouri with Dustin Britzman officiating. Speakers, and dear friends, Ed Fowler read the obituary, while Matt Sutcliffe shared his favorite stories about Chief Hobbs. Son, Russell Hobbs gave a touching eulogy about his beloved father, and daughter-in-law, Danielle Hobbs shared several of “Rick quotes and thoughts.” Uniformed Personal saluted Rick one last time before Chief Hobbs was taken on his final ride on the back of a Fire truck to Oaklawn Cemetery where Chief Hobbs was laid to rest. Escorts included Ed Fowler, Doug Yurecko, Jarrod Arnall, Brandon Bradstreet, Michael Campbell, Dustin Britzman, Jacob Gormley and Bob Sperberg. Honorary escorts included Gene Hobbs, Mike Hobbs, Ralph Forester, Bob Williams, Tim Farmer, Rick Grno, Robert Smith, Matt Sutcliffe, Phil Pitts, and Skip Hankins. Dustin Britzman opened the graveside service. The Proclamations and Resolution #2766 was given by State Fire Marshall, Tim Dean. Rick’s first cousin, Representative, Don Mayhew presented the American flag, while Bill Hardwick presented the Missouri flag; both flags had been flown over the state capitol during the week of Rick’s passing, and were presented to Rick’s wife, Robin. Two Fireman folded the draped flag from the casket as Taps were being played before it too was presented to Robin before the Ringing of the Bell Ceremony began. A lone helicopter flew over just before Pulaski County 911 operator gave the Last Call for 1301 Chief, and Battalion Chief 109903, Rickey Lee Hobbs was given, his Last Alarm. Bagpipes played “Amazing Grace” at the conclusion of Chief Hobbs’s service. Services were under the care and direction of Memorial Chapel of Richland. In lieu of flowers memorial contributions may be made in memory of Rick Hobbs and can be left at the Memorial Chapel of Richland. Online condolences can be sent at www.memorialchapelsandcrematory.com.

The family of Rickey Lee Hobbs created this Life Tributes page to make it easy to share your memories.