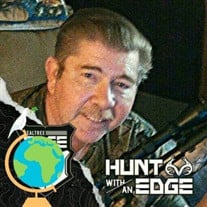 Ricky Allen Brown, son of the late Willis Rosco Brown and Delphine (Long) Brown, was born September 12, 1961 in Richland, Missouri. As a young boy, Ricky attended Laquey Elementary and then Waynesville High School. On July 19, 1999 in Lebanon, Missouri, Ricky was united in marriage to Reinette Elaine Brewer. They shared over 22 years of marriage together and many wonderful memories. Ricky worked as an apartment complex supervisor for several years and as the main supervisor for Ramada Inn. He worked as a cab driver and then later owned and operated his own heating and cooling business. n his spare time, Ricky enjoyed being outdoors. You could find him either hunting, fishing, going camping, or a combination of all three. He just loved being outdoors and spending time with his dog, “Lady B”. Most importantly, he loved his family dearly and would do anything for them. He enjoyed spending time with them every chance that he could. Ricky passed away Sunday, September 19, 2021 in the Lake Regional Hospital of Osage Beach, Missouri having attained the age of 60 years. He will be sadly missed, but fondly remembered by all those that knew and loved him. He leaves to cherish his memory, his wife: Reinette Brown of Waynesville, MO; two sons: Greg Brewer (Sind) of Cottage Hills, IL and James Brewer of Mount Vernon, IL; one grandchild: Emerald Brewer of Cottage Hills, IL; special cousin: Stephine Farmer of Durant, OK; other relatives and friends. In addition to his parents, Ricky was preceded in death by two brothers: Charles and Donald Brown. Memorial gathering will be held from 3:00 – 5:00 p.m. Sunday, September 26, 2021 in the Waynesville City Park, Pavilion #3. Arrangements are under the direction of Memorial Chapels and Crematory of Waynesville / St. Robert. In lieu of flowers, memorial contributions may be made in memory of Ricky Brown and may be left at Memorial Chapels and Crematory of Waynesville / St. Robert.

The family of Ricky Allen Brown created this Life Tributes page to make it easy to share your memories.