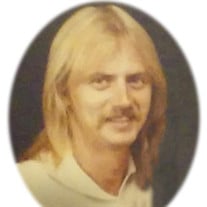 Ricky Allen Crisp, son of Ervin Ermin and Helen Lavon (Hensley) Crisp, was born January 12, 1958 in Springfield, Missouri. He passed away on October 3, 2015 at his home in Springfield, Missouri having attained the age of fifty-seven years. Ricky grew up in both Springfield and Hartville, Missouri and attended Central High School in Springfield. Ricky was an all-around sports fan and was an avid supporter of the St. Louis Cardinals and Springfield Cardinals, SMU Bears and Kansas City Royals. He loved to be outdoors while fishing, gigging, grabbing and hunting deer, squirrel, and rabbits. He also enjoyed working on different vehicles. Ricky leaves to cherish his memory, his daughter, Summer Crisp of Springfield, Mo; two step-daughters, Sherrie Corea of Austin, TX and Shauna Williams of Springfield, MO; his mother, Helen Crisp of Springfield, MO; a sister, Carlene Carriger of Hartville, MO; two brothers, Allen and Marvin Crisp both of Springfield, MO; a number of nieces and nephews; five step-grandchildren, Jeremiah, Jose, Jaykob, Brooklyn and Bailey; as well as a host of other relatives and friends. God has received a man of integrity, compassion, honesty and extremely patriotic. Ricky will be sadly missed by all those that knew and loved him. Ricky was preceded in death by his father, Ervin Crisp; maternal grandparents: Hugh and Osa Henslee; and paternal grandparents: Margie and Giffen Crisp. Graveside services were held at 10:30 a.m. Thursday, October 8, 2015 in the Steele Memorial Cemetery in Hartville, Missouri with Rev. Christopher Hendrix officiating. The songs “Slipped Away” by Avril Lavigne, “How Great Thou Art” by Elvis Presley and “Tears in Heaven” by Eric Clapton were played. Serving as escorts were Anthony Carriger, Damon Crisp, Larry Carriger, John Shull, Randy Kuhn and Rick Kuhn. Services were under the direction of Memorial Chapels and Crematory of Waynesville / St. Robert. Memorial contributions may be made in memory of Ricky Crisp and may be left at the funeral home.

The family of Ricky Allen Crisp created this Life Tributes page to make it easy to share your memories.