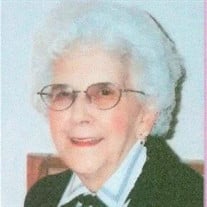 Rita Jane Stumpf passed away at 92 years young on June 4, 2017, in Las Vegas, Nevada. She was the daughter of Leonard and Clara (Dubey) Champagne. Rita was born on September 30, 1924, in Quinnesec, Michigan. Rita married Howard W. (Bud) Stumpf, the love of her life, on June 28, 1945, in Manitowoc, Wisconsin. He died at 82 years old after 52 years of marriage. Rita and Bud lived in Occidental, California until they moved to Sandpoint, Idaho, in 1967. Rita worked at the Pastime Café until they moved to Missouri in 1974. Rita continued to do waitressing in Missouri until the death of Bud. Rita stayed in Missouri until her daughters talked her into moving west. She moved to St. George, Utah, in 2008 and lived with her daughter, Shirley. They eventually moved to Las Vegas. Rita is survived by four daughters: Terri (Ken) Monday of Kingman, AZ, Shirley Summy of Las Vegas, NV, Debbie Hart of Cocolalla, ID and Penny (Brian) Wood of Sandpoint, ID; nine grandchildren; sixteen great grandchildren; four nieces; one nephew; other relatives and friends. A graveside service will be held at the Waynesville Memorial Park Cemetery in Waynesville, Missouri on September 22, 2017 at 11:00 a.m. under the direction of Memorial Chapels and Crematory of Waynesville / St. Robert.

The family of Rita Jane Stumpf created this Life Tributes page to make it easy to share your memories.