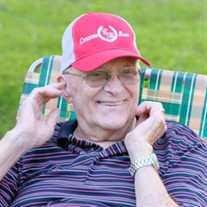 Robert “Bob” William Belton, son of the late Clyde Monroe Belton and Mary Celestial (Anderson) Belton, was born November 27, 1936 in St. Louis Missouri. As a young boy, Bob grew up and attended school in Iowa before the family moved to Crocker, Missouri where he graduated from Crocker High School. Shortly after graduation, Bob entered the United States Navy and served his country faithfully during 1955 – 1959 on the USS Iowa and the USS Galveston. On April 21, 1957, Bob was united in marriage to Betty Lou Rowden in St. Robert, Missouri. They just celebrated their 63rd wedding anniversary and they shared many wonderful memories along with two children: Steve and Wendy. After his honorable discharge from the U.S. Navy, Bob continued serving his country as a firefighter on Fort Leonard Wood from 1961 until his retirement in 1990. After his retirement from the fire department, Bob was able to do more of the things that he enjoyed. He loved being outdoors, whether it was playing a round or two of golf or riding his motorcycle. He was also a ham radio operator. Bob was very active in his community and served on the Board of Directors for the Waynesville / St. Robert Senior Citizens Center. He was also a member of the Christian Motorcyclists Association and the Moto Guzzi National Owners Club. At a young age, Bob made a profession of faith. He was a faithful member of the Church of God in St. Robert and served as a board member and head usher for many years. He was there every time the church doors were open and he loved serving with his church family. His faith was very important to him and he shared his faith with everyone he could. Bob went home to be with his Lord on Thursday, April 30, 2020 in the Phelps Health Center of Rolla, Missouri having attained the age of 83 years. He will be greatly missed, but fondly remembered by all those who knew and loved him. Bob leaves to cherish his memory, his loving wife: Betty Belton of the home; two children: Steve Belton (Joy) of St. Robert, MO and Wendy O’Brennan (Gerry) of Rolla, MO; five grandchildren: Bobby Belton of St. Robert, MO, Lindsy Belton of Kansas City, MO, Stefanie Weber (Luke) of Jefferson City, MO, Kelsey Ford (Justin) of Hazelwood, MO and Shane O’Brennan of Rolla, MO; two great grandchildren: Brianna and Maddy; three sisters: Margaret Malloy of Lake St. Louis, MO, Barbara Burns (Don) and Janet Charlton (Paul), all of Las Vegas, NV; several nieces, nephews, other relatives and many friends. Services were held at 2:00 p.m. Monday, May 4, 2020 in the Church of God of St. Robert, Missouri with Rev. William Kempen and Pastor Ron Leggett officiating. The songs “He Didn’t Throw the Clay Away” by the Lesters, “The Old Rugged Cross” by Alan Jackson were played and Becky Lercher sang “Celebrate Me Home”. Serving as escorts were Steve Belton, Bobby Belton, Gerry O’Brennan, Shane O”Brennan, Luke Weber and Justin Ford. Serving as honorary escorts were Bland Smith, Andy Mostajo, Lou Farkasdi, Frank Wedge and Randy Yoakum. Burial followed in the Waynesville Memorial Park Cemetery of Waynesville, Missouri. Services were under the direction of Memorial Chapels and Crematory of Waynesville / St. Robert. Memorial contributions may be made in memory of Bob Belton to the Church of God of St. Robert and may be left at the funeral home.

The family of Robert "Bob" William Belton created this Life Tributes page to make it easy to share your memories.