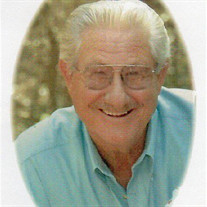 Robert Eldon “Bob” Fugitt, the son of the late Hubert E. and Jessie Marie (Newman) Fugitt, was born April 22, 1937 near Mount Vernon, Missouri. Bob peaceably passed into the arms of Jesus on Saturday, January 30, 2016 in the Richland Care Center in Richland, Missouri. Bob, as he was known to his family and friends, attended school in Carthage and graduated in 1955 from Carthage High School. While attending his father’s first sermon, Bob accepted Christ as his personal Lord and Savior at a young age. He was a member of the First Baptist Church of Richland, attending faithfully as long as his health permitted. He served as a Deacon there and held other church offices. He also served on the Board of Directors at the Richland Care Center. In 1956 he married Nellie Raona (Kinnaird) Wade and to this union were born, Richard Lee, Marilynn Kay, Glenda Ellen, and Bruce Ray. In 1972 Bob met and married Joyce Etta (Rayl) Roam. The family’s love and laughter grew even greater with the addition of Joyce’s son, Thomas Edward. Together Bob and Joyce shared over thirty-six years of marriage before Joyce’s passing on December 11, 2008. Bob was a blessed man as God brought another wonderful lady, Marilyn Sue Grider into his life and on June 27, 2010 the couple united in marriage in Marshfield, Missouri and the family grew once again with the addition of Marilynn’s children and grandchildren. Family has always been the most valued treasure in Bob’s life. The pride and joy he had for each and every one of his children and grandchildren were immeasurable. Bob had a love for farming. His family and the farm were his greatest passions in life. In earlier years he worked and retired from the PX at Fort Leonard Wood, owned and operated the South Gate Station and Café, the Ted William’s Steak House, and the Fugitt Family Inn, where he was known for his excellent BBQ. His warm smile and outgoing personality were some of his best assets. He made friends easily and never met a stranger. Bob valued his friends and treasured the lasting friendships he’d made throughout the years. Bob will live on forever in the hearts of all those who knew and loved him. He leaves behind his devoted wife, Marilynn; his children, Marilynn Gorman (Bill) of Monett, MO, Glenda Duncan (Mark) of Cassville, MO, Bruce Fugitt (Jan) of Mountain Grove, MO, Tommy Roam (Wanda) of Jefferson City, MO, Lori McNail (Jamie) of Richland, MO, Randy Green (Debbie) of Norborne, MO, Kim Davis (Bobby) of Richmond, MO, and Pam Hartwig of Hardin, MO; twenty-one grandchildren; numerous great-grandchildren and great-great-grandchildren; three sisters, Beverly Laswell (Mearle) of Republic, MO, Brenda Lollar (Grover) of Venice, FL, and Loretta Hammon (Frank) of Lawrenceburg, IN; four brothers, Ron Fugitt of Halltown, MO, David Fugitt (Kathy) of Nokomis, FL, Steve Fugitt (Judith) of Norwood, MO, and Jeff Fugitt (Jamie) of Walnut Shade, MO; a number of nieces and nephew, as well as a host of other relatives and friends. He was preceded in death by his parents; second wife, Joyce Fugitt; son, Richard Lee Fugitt; daughters, Peggy Denise Roam and Kristi McCoy. Services were held at 2:00 p.m., Monday, February 1, 2016 in the Memorial Chapel of Richland with Jeff Fugitt, Mearle Laswell and Steve Fugitt officiating. Pianist, Barbara Lee accompanied her husband, Bud Lee as he sang "His Eye Is On the Sparrow" and Jennifer Harrison sang "Beulah Land." Serving as escorts were Bob's grandsons, Ethan Harrison, Joel Harrison, Patrick Gorman, Barry Postelwait, Heath Postelwait, Evan Fugitt, Jamie McNail and Joseph Reed. Burial followed in the Oaklawn Cemetery of Richland, MO. Services were under the direction of Memorial Chapel of Richland.

The family of Robert "Bob" E. Fugitt created this Life Tributes page to make it easy to share your memories.

Robert Eldon “Bob” Fugitt, the son of the late Hubert E. and...