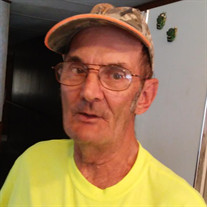 Robert "Bob" James Shell, son of the late Daniel James Shell, Sr. and Kathrine Irene (Tucker) Shell, was born November 11, 1952, in Racine, Wisconsin. On April 10, 1976, Bob was united in marriage to Millie Elaine (Henson) Shell where together they shared 39 years of Marriage and had three daughters: Christina Lynn, Lisa Marie and Sherri Dawn. After moving to Missouri and marrying the love of his life, Bob worked for numerous businesses locally. A majority of his career was spent with the Belshe family. He assisted them at the farm as well as the Richland Hardware for 18 years. Bob also worked for MOCA, Charger Boat Factory and Rastur Development. Prior to Bob being diagnosed with cancer he was accepted into the City of Richland family. He loved working for the City and enjoyed his co-workers (his City Family – Steve Alexander, Jimmy Smith, Johnny Henry, Rick Hobbs, Bo Sumner, Shad Jennings, Bobby Wall, and the Ladies in the office) most of all. Bob enjoyed fishing, deer hunting, mushroom hunting and helping friends and family on various projects. He especially enjoyed working with Bobby Baker (Baker Auction) on the weekends and spending time with his wife, children, grandchildren and family. He always looked forward to the fourth of July every year. He would make sure his family had plenty of frog legs, catfish, fried biscuits and taters. Bob was called to Heaven on Monday, February 8, 2016 in his home in Richland, Missouri. He was surrounded by his loved ones. He attained the age of 63 years, 2 months and 27 days. Bob was greatly loved and will be forever remembered by his wife, Millie Elaine; his three daughters: Christina Lynn Shell of the home; Lisa Marie Parrish and her husband, Adam, of Waynesville, Missouri, and Sherri Dawn Miller, and her husband, David, of Laquey, Missouri; three grandchildren: Keshea Marie Parrish, David “Archie” Miller and James Alan Parrish; two brothers: William “Bill” Shell of Lebanon, Missouri and Raymond Shell of Richland, Missouri; three sisters: Betty Wagner, Cindy Day and Sandra Crossland, all of Richland, Missouri; several nieces, nephews, other relatives and friends. Bob loved his son-in-law’s (David Miller and Adam Parrish) as if they were his own sons as well as a great friend who became a part of the Shell family in 2003, Joseph “Joe” Covello of Lebanon, Missouri. In addition to his parents, Bob was preceded in death by one brother: Daniel James Shell, Jr. Services were held at 11:00 a.m., Thursday, February 11, 2016 in the First Baptist Church of Richland with Pastor Bob Lilly officiating. Longtime friend, Bobby Baker shared special memories about Bob. Favorite music selections included "Remember When," "Brotherly Love" and "Go Rest High on that Mountain." Serving as pallbearers were David Miller, Archie Miller, Bill Shell, Adam Parrish, Jimmy Smith and Rick Hobbs. Honorary pallbearers included Johnny Henry, Bo Sumner, Steve Alexander and Shad Jennings. Burial followed in the Oaklawn Cemetery of Richland, MO. Services were under the direction of Memorial Chapel of Richland. In lieu of flowers, memorial contributions may be made in memory of Bob Shell and can be left at the Memorial Chapel of Richland. Online condolences may be left at www.memorialchapelsandcrematory.com

The family of Robert "Bob" James Shell created this Life Tributes page to make it easy to share your memories.