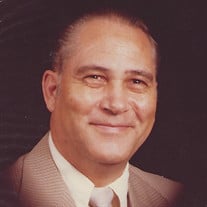 Robert “Bob” Merlin Stewart, son of the late William Oliver and Minnie Lucinda (Hazelrigg) Stewart, was born May 25, 1926 in Richland, Missouri. Bob, as he was known by his friends and family, grew up in the Waynesville area and graduated from Waynesville High School with the Class of 1942. At the age of 17, Bob taught grades 5-8 at Pleasant Grove School. He then went to work at Fort Leonard Wood before entering the United States Army. He served his country faithfully in the South Pacific as a medic / surgery tech during World War II. On January 12, 1947, Bob was united in marriage to Sarah Elizabeth Gan. They shared 60 years of marriage together and were blessed with four children: Sandra, William Robert, Marlena and Richard. Bob and Elizabeth lived in Rolla while Bob was attending the Missouri School of Mines. They lived in East Peoria, Illinois while Bob worked for Caterpillar and in the fall of 1950, they moved back to Waynesville when Bob was employed at Fort Leonard Wood. Bob went to work in Rolla at the U.S.G.S. in January 1957. He retired in March of 1981. Bob and Elizabeth loved to travel and camp, which they combined when they started their craft shows all over Missouri and many other states. Their last shows featured beautiful, “Plenty Pockets Purses”, made from “pre-loved” jeans which Bob cut and Elizabeth sewed. They called their business “Stewart’s Denim-ite Designs.” Bob also made picture frames and in fact he cut off his thumb while making a barnwood picture frame. Bob was currently attending Community Christian Church of Rolla and had attended Ridgeview Christian Church of Rolla and First Christian Church of Waynesville. Bob loved and was very proud of his children and grandchildren and made many trips to visit them. Bob departed this life Monday, June 24, 2019 in the Phelps Health Hospital of Rolla, Missouri having attained the age of 93 years. Bob leaves to cherish his memory, his four children: Sandi Gass of Johnston, IA, W. Robert Stewart (Leslie) of O’Fallon, IL, Marlena Jones (Terry) of Rolla, MO and Richard Stewart of Washington, IL; two sisters: Betty Atterberry and Hazel Griffin, both of Waynesville, MO; several grandchildren, great grandchildren, nieces, nephews, other relatives and friends. In addition to his parents, Bob was preceded in death by his wife, Elizabeth; one brother: Winfield Stewart; two stepbrothers: Virgil Melton and Glen Truman; half-sister: Elva Pearl; daughter-in-law: Gloria Stewart; and infant grandson: Jeremy Jones. Services were held at 12:00 p.m. Saturday, June 29, 2019 in the Community Christian Church of Rolla, Missouri with Pastor Dale Wands officiating. The song “Forever and Ever, Amen” by Randy Travis was played and the congregation sang “He Lives”. Serving as honorary escorts were Brandon Gass, Kyle Jones, Johsua Stewart and Mikaid Stewart. Burial with military honors followed in the Idumea Cemetery of Laquey, Missouri. Services were under the direction of Memorial Chapels and Crematory of Waynesville / St. Robert.

Robert &#8220;Bob&#8221; Merlin Stewart, son of the late William Oliver and Minnie Lucinda (Hazelrigg) Stewart, was born May 25, 1926 in Richland, Missouri. Bob, as he was known by his friends and family, grew up in the Waynesville area and... View Obituary & Service Information

The family of Robert "Bob" Merlin Stewart created this Life Tributes page to make it easy to share your memories.