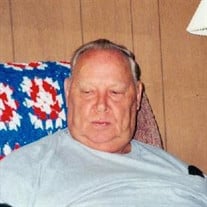 Robert Donald Carlson, son of the late Charles J. and Dagmar (Karlson) Carlson, was born May 3, 1934 in Worcester, Massachusetts where he grew up and attended school. In 1954, Bob, as he was known to his family and friends, enlisted in the United States Army and was honorably discharged in 1957. While stationed at Fort Leonard Wood, Missouri, he met the love of his life, Louella Vaughan. After only three months of courtship, they were united in marriage on September 6, 1956 in Waynesville, Missouri. They shared over 58 years of marriage together and were blessed with three children: Teresa, Robert, Jr. and Kelly. Bob and Louella moved to Massachusetts and he began working in a factory. Louella became homesick for Missouri, so they moved back to Waynesville where Bob worked for George Kaplan at the Pawn Shop. In 1969, Bob bought the Phillips 66 gas station in Waynesville and continued to own and operate it until he retired in 1999. Bob was a people person and he enjoyed visiting with his customers that came into the station. After retiring, Bob was able to spend more time doing the things he enjoyed. He loved to fish, watch TV, listening to country music and also caring for his dogs and horses. But he especially loved spending time with his friends and family, especially his grandchildren. Bob passed away Saturday, December 27, 2014 in the Richland Care Center of Richland, Missouri having attained the age of 80 years. He will be sadly missed, but fondly remembered by all those that knew and loved him. Bob leaves to cherish his memory, his wife, Louella Carlson of the home; three children: Teresa Lynn Kelley (Charles) of Florissant, MO, Robert Donald Carlson, Jr. (Betty) of Laquey, MO, and Kelly Michelle Tillott of Waynesville, MO; seven grandchildren: Tyler Kelley, Dustin Kelley, Joshua Carlson, Emily McCoy, Rebecca Tillott, Rachael Figueroa and Ashley Tillott; eight great grandchildren; several nieces, nephews, other relatives and friends. In addition to his parents, Bob was preceded in death by two brothers, three sisters, six half-brothers and sisters, and one great granddaughter, Ariadne Figueroa. Funeral services were held at 1:00 p.m. Tuesday, December 30, 2014 in the Memorial Chapels and Crematory of Waynesville / St. Robert with Rev. Christopher Hendrix officiating. The songs “In the Garden”, “Amazing Grace”, “You Raise Me Up” and “How Great Thou Art” were played. Serving as escorts were Darrell Vaughan, Roy Doyle, Scott Davis, Tyler Kelley, Dustin Kelley, Joshua Carlson and Anatole Figueroa. Burial with military honors followed in the Missouri Veterans Cemetery of Waynesville. Military honors were provided by the Missouri Honors Team. Memorial contributions may be made in memory of Bob Carlson and may be left at the funeral home.

Robert Donald Carlson, son of the late Charles J. and Dagmar (Karlson) Carlson, was born May 3, 1934 in Worcester, Massachusetts where he grew up and attended school. In 1954, Bob, as he was known to his family and friends, enlisted in... View Obituary & Service Information

The family of Robert Donald Carlson created this Life Tributes page to make it easy to share your memories.