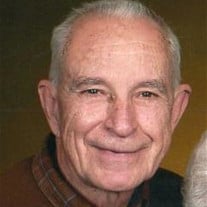 Robert Lee Fowler, son of the late Oran William and Hazel Marie (Lewis) Fowler, was born June 26, 1931 in Montreal, Missouri. “Bob” as he was known by, grew up in Montreal and Linn Creek, Missouri, where he attended elementary school. Bob graduated from Stoutland High School in 1949. On February 18, 1951, Bob was united in marriage to his classmate and neighbor, Alice Lorene Frisbee in Richland, Missouri, and this union was blessed with two children, Janet and Michael. On February 14, 1952, Bob entered the United States Army and served his country faithfully until his honorable discharge on January 28, 1954. For his faithful service, Bob received several awards and commendations: Good Conduct Medal, National Defense Service Medal, Korean Service Medal w/1 Bronze Service Star and United Nations Service Medal. Bob worked at Ozark Fisheries for a time before going to work at Fort Leonard Wood, first as an electrician instructor, and later a planner-estimator. He retired from FLW in 1986. Bob still kept busy and went out each year with the Missouri Church Builders, helping to build and repair churches where ever the need may be, including England and Brazil. Bob made a profession of faith at a young age. At the time of his death, Bob had been a longtime, faithful member of First Baptist Church of Richland where he served as Deacon and had taught Sunday school. Bob always taught the importance of family and faith; he lived it. Bob’s other hobbies included gardening, fishing, woodworking, photography, MARS radio operator, and volunteering to help the first graders read at school; the children fondly knew him as “Poppy”, as did his beloved grandchildren he so proudly adored. Bob and Alice shared over 65 years of marriage together and a lifetime of wonderful memories before he went home to be with his Lord on the evening of Friday, December 23, 2016, having attained the age of 85 years. He leaves to cherish his memory his loving wife, Alice of the home; a daughter, Janet Walker (Todd) of Richland, MO; a son, Michael Fowler (Debbie) of Waynesville, MO; four grandsons, Casey Fowler (Cassie) of Diamondhead, MS, Alexander Fowler (Tember) of Nixa, MO, Austin Walker of Richland, MO and Cameron Walker of Richland, MO; his sister, Erna Belle Fowler of Richland, MO; a number of nieces and nephews; as well as a host of other relatives and friends. In addition to his parents, Bob was preceded in death by one brother, Gene Fowler and one sister, Mildred Dye. Bob will be missed here, that is for sure; but those who knew and loved him will always hide each precious memory in our hearts. Until we meet again Poppy... Services were held at 10:00a.m. Friday, December 23, 2016, in the First Baptist Church of Richland with Pastor’s Bob Lilly and Pastor Mark Tallant officiating. Grandson and Trumpeter, Austin Walker; accompanied by pianist, Janet Walker played “How Great Thou Art’. Soloist/Pianist Vivian King sang “It IS Well with My Soul”. Pianist, Marleen Brown provided prelude and postlude music. Serving as escorts were Troy York, Art Bryant, Tim Hardesty, Gary Brown, Greg Dougan and Mark Tallant. Burial with Military Honors followed in the Oaklawn Cemetery of Richland, Missouri. Services were under the direction of Memorial Chapel of Richland. Memorial contributions can be made to the First Baptist Church Scholarship Fund or The Alzheimer’s Association, and contributions can be left at the funeral home.

Robert Lee Fowler, son of the late Oran William and Hazel Marie (Lewis) Fowler, was born June 26, 1931 in Montreal, Missouri. &#8220;Bob&#8221; as he was known by, grew up in Montreal and Linn Creek, Missouri, where he attended elementary school.... View Obituary & Service Information

The family of Robert Lee "Bob" Fowler created this Life Tributes page to make it easy to share your memories.