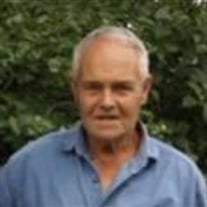 Robert Morris Lambeth, son of Harry Oliver and Mary Irene (Karr) Lambeth, was born September 19, 1931 in Spring Creek, Missouri where he lived and grew up attending school. Bob, as he was known by, made a profession of faith as a young man. He was a faithful follower of his Lord and Savior. He had attended the Church of Christ of Swedeborg, where he’d often sang praises to God. The love and prayers Bob received from his church families through the years were precious to him. He treasured each of them. Bob met the girl of his dreams, Eva Jewel Perkins while working at Ft. Leonard Wood, Missouri; the two were married on May 6, 1961 in Crocker, Missouri. They shared a lifetime of memories, love and laughter during their nearly fifty six years together. Bob entered into the Airforce on September 20, 1947, proudly serving his country until his honorable discharge on December 14, 1948. After coming home from the service, Bob worked several jobs before starting his career at Ft. Leonard Wood, as an Automotive Mechanic in the Transportation Division for Civil Service for over thirty years before retiring in 1986. Bob then began driving a school bus for the Laquey and Richland school districts. He was also a custodian for Richland High School, where he was well loved by the students. In Bob’s younger years he loved racing stock-cars in St. Roberts and the Rolla track. He greatly enjoyed his fishing trips to the river with family and friends, cutting wood, coon hunting, spending time working in his garden with “Granny”, as Eva was affectionately called. He cared of his chickens and dogs especially his little BB dog, Bob’s buddy. You could always find Bob working on cars and trucks. Anyone who knew Bob knew he was a dedicated, die hard Ford man. Above all, Bob was a devoted friend and family man cherishing each and every moment with them. However, times spent with his grandchildren were most special as they were his pride and joy. Bob began his eternal journey with his Lord on the morning of Friday, May 5, 2017 surrounded by his loving family. He leaves behind to cherish his memory, his loving wife, Eva Lambeth of the home, sons: Rob (Carolyn) Lambeth of Richland, MO, Paul Ellis of Richland, MO, Kenny (Audrey) Ellis of Crocker, MO and Tom (Debbie) of Swedeborg, MO; 11 grandchildren: Justin (Heather) Elliott, Jamie (Meranda) Ellis, Jerry (Sondra) Ellis, Randy (Carrie) Ellis, Keith Ellis, Christine Ellis, Mindy (Curt) Rich, Tim (Sarah) Ellis, Brent (Myhanh) Canterbury, Ashley Bell and Amber (Jeff) Porter; 22 great grandchildren; one brother: Kenneth (Jeanne) Lambeth of Arcola, IL; a host of nieces, nephews, other relatives and friends. Bob is preceded in death by his parents, one son, Charley Ellis, brother, Roger Dale Lambeth and sister, Loretta Durhan. Bob will be sadly missed and fondly remembered by those who knew and loved him but on this day, Heaven gained a special man! Services were held at 3:00 p.m., Friday, May 12, 2017 in the Memorial Chapel of Richland with Pastor Doug Jacobson officiating. Rob Lambeth shared a letter he had written to his father. Soloist, Charles Boren sang "Jesus Keep Me Near The Cross," "Sweet Hour of Prayer" and "There's A Land Beyond the River." Burial with military honors followed in the Mt. View Cemetery near Richland, MO. Services were under the direction of Memorial Chapel of Richland. Memorial contributions may be made in memory of Bob Lambeth to the Mt. View Cemetery and may be left at the Memorial Chapel of Richland.

Robert Morris Lambeth, son of Harry Oliver and Mary Irene (Karr) Lambeth, was born September 19, 1931 in Spring Creek, Missouri where he lived and grew up attending school. Bob, as he was known by, made a profession of faith as a young man.... View Obituary & Service Information

The family of Robert Morris "Bob" Lambeth created this Life Tributes page to make it easy to share your memories.