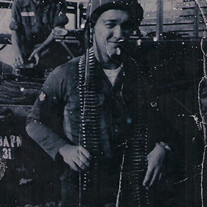 Robert Alan Perdue, son of the late Clarence Albert and Mary Elizabeth (Knight) Perdue, was born April 20, 1947 in Muscatine, Iowa where he grew up and attended school. Robert entered the United States Army and served his country faithfully in Vietnam until his honorable discharge in 1967. Robert came to the Fort Leonard Wood, Missouri area to work in construction. While here he met the love of his life, Linda Kathleen Wallace and they were united in marriage on September 20, 1980. They were blessed with two boys, John and Jacob and the family stayed in the Waynesville area and Robert continued working in construction all over the state. In his spare time, Robert enjoyed being outdoors. You could find him either fishing, hunting or out in the woods looking for mushrooms. He was a member of the Disabled American Veterans Post in Crocker. Robert never met a stranger. He enjoyed visiting with people. But the one thing he loved more than anything was his family. He was a wonderful husband and father. Robert passed away Saturday, March 24, 2018 in the Dixon Nursing and Rehab of Dixon, Missouri having attained the age of 70 years, 11 months and 4 days. He will be sadly missed, but fondly remembered by all those that knew and loved him. Robert leaves to cherish his memory, his loving wife: Linda Perdue of the home; two sons: John Ryan Perdue of St. Louis, MO and Jacob Lee Perdue of Waynesville, MO; one grandchild: Lillian Grace Perdue of Blue Springs, MO; two brothers: Johnny Perdue (Elsie) of Dixon, MO and Sonny Perdue of Davenport, IA; one sister: Lola Rice of Davenport, IA; several nieces, nephews, other relatives and friends. In addition to his parents, Robert was preceded in death by three sisters. Graveside services with military honors were held at 1:00 p.m. Friday, April 20, 2018 in the Missouri Veterans Cemetery of Waynesville, Missouri with Pastor Patrick Moore officiating. Military honors were provided by the Missouri Honors Team. Services were under the direction of Memorial Chapels and Crematory of Waynesville / St. Robert. Memorial contributions may be made in memory of Robert Perdue and may be left at the funeral home.

The family of Robert Alan Perdue created this Life Tributes page to make it easy to share your memories.