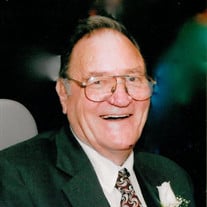 Robert “Bob” Lee Willhite, son of the late William Ira and Ferne Louise (Wilkinson) Willhite, was born August 24, 1931 in Kansas City, Missouri where he grew up and attended high school. As a young boy, Bob was raised by his maternal grandmother. Bob left school at 15 years of age to begin work as a cook, and then joined the United States Navy. After 4 years in the Navy, he entered University of Missouri Kansas City receiving his Bachelor’s Degree in 1961, majoring in Accounting. Bob met the love of his life, Anne Mae Cantrell, while they were both competing in roller skating. On July 21, 1956, Bob and Anne were united in marriage in Kansas City. They shared over 35 years of marriage together and were blessed with two children: Robert James and Linda Lou. Anne preceded Bob in death on August 6, 1991. Bob was very hard working. He worked for Midland Lithography in Kansas City where he loaded paper for printing Hallmark Cards. He later worked for Harry Surface Construction and served as treasurer of the company. He then bought a franchise from Mes-Tex Steel and built 19 commercial buildings in Missouri, Oklahoma, Texas and Louisiana. One of those buildings was the bowling alley in St. Robert. Bob later purchased the bowling alley and moved to the St. Robert area in 1964 because he was tired of the traveling and being away from his family. After the bowling alley burned down in 1975, Bob purchased Jim’s Music and then the Rivera Lounge and Annie Roos which he operated until 2003. Bob was an avid collector. He collected coins and also old Cadillacs and restored them. In his 40’s, Bob learned how to snow ski and he loved being out in the snow. He was an avid outdoorsman and owned his own boat. He also enjoyed going to the remote part of Canada to go fishing and due to him being a private pilot, he would fly to Canada and land on very short runways. Bob loved his country and was honored to be able to serve as a member of the Abou Ben Adhem, 32nd Degree Mason, Shriner and was captain of the Motor Corps and rode motorcycles with the Shriners. He took great pride in flying children to the Shriner’s Children’s Hospitals for treatment. Most importantly, Bob loved his family and enjoyed spending time with them whenever possible. Bob passed away Thursday, August 14, 2014 in the Harry S Truman Veterans Hospital of Columbia, Missouri having attained the age of 82 years. He will be sadly missed, but fondly remembered by all those that knew and loved him. Bob leaves to cherish his memory, one son: Robert James Willhite (Debra) of Universal City, TX; one daughter: Linda Lou Willhite of Unionville, CT; three grandchildren: Shaun Willhite (Amanda) of Burke, VA, Jennifer Park (Jeff) of San Antonio, TX and Rebecca Bellos (Thomas) of Austin, TX; three great grandchildren: Madilyn Willhite, Vivian Willhite and Mckenzie Bellos; one nephew: Bill Willhite; one niece: Kathi Willhite Butler; and a host of friends. In addition to his parents and wife, Bob was preceded in death by one brother: William “Bill” Willhite.

Robert &#8220;Bob&#8221; Lee Willhite, son of the late William Ira and Ferne Louise (Wilkinson) Willhite, was born August 24, 1931 in Kansas City, Missouri where he grew up and attended high school. As a young boy, Bob was raised by his maternal... View Obituary & Service Information

The family of Robert Lee Willhite created this Life Tributes page to make it easy to share your memories.