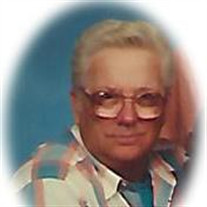 Robert Harold Yount, Sr., son of the late Medford Sylvester and Mildred D. (Johnson) Yount, was born at home on August 26, 1936 in St. Louis County, Missouri. He passed away Sunday, March 3, 2019 in the University of Missouri Hospital and Clinics of Columbia, Missouri having attained the age of 82 years. Robert was one of eight children and he spent most of his years growing up in St. Louis. He worked as an iron worker along with his dad. They helped build the St. Louis Arch and the Daniel Boone Bridge in St. Charles, Missouri. On July 30, 1960 in St. Louis County, Missouri, Robert was united in marriage to Norma Lee Calvert. They shared over 43 years of marriage together before she preceded him in death on February 13, 2004. Robert and Norma were blessed with four children: Tina, Robert Jr., Tony and Tracy. Robert and the family moved to the Laquey area in September 1991 after he retired where he bought a farm. He enjoyed working on the farm and most of the time you would find him working in the hayfield. In the 1950s, Robert built a stock car and raced for several years. From 1960 - 1991, he trained horses and enjoyed working especially with the thoroughbreds at various race tracks. He also enjoyed being outdoors while hunting and going to casinos. On November 7, 2008, Robert was united in marriage to Lillie Esther Talbot. They enjoyed several years together. Robert will be sadly missed, but fondly remembered by all those who knew and loved him. He leaves to cherish his memory, his wife: Esther Yount of the home; four children: Tina Yount (Barbara) of Laquey, MO, Robert Yount, Jr. (Grace) of Laquey, MO, Tony Yount of Arnold, MO and Tracy Yount of Laquey, MO; five grandchildren: Robert Yount, III of Laquey, MO, Shane Yount of Richland, MO, Taylor Yount of Springfield, MO, Thomas Yount of the state of California and Oliver Yount of St. Louis, MO; two great grandchildren: Charlee Yount and Robert Yount, IV; three brothers: Bill Yount of the state of Arizona, Ricky Yount of Barnhardt, MO and Don Yount of the state of Nevada; two sisters: Marilyn G’Sell of Arnold, MO and Vicky Spence of Barnhardt, MO; several nieces, nephews, other relatives and friends. In addition to his parents and first wife, Robert was preceded in death by two brothers. Graveside services were held at 3:00 p.m. Wednesday, March 6, 2019 in the Sunset Memorial Estates Cemetery of Waynesville with Pastor Danny Graves officiating. Serving as escorts were family and friends. Services were under the direction of Memorial Chapels and Crematory of Waynesville / St. Robert.

Robert Harold Yount, Sr., son of the late Medford Sylvester and Mildred D. (Johnson) Yount, was born at home on August 26, 1936 in St. Louis County, Missouri. He passed away Sunday, March 3, 2019 in the University of Missouri Hospital and Clinics... View Obituary & Service Information

The family of Robert Harold Yount Sr. created this Life Tributes page to make it easy to share your memories.