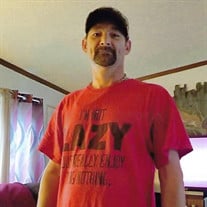 Rocky “Daniel” Fullington, son of Rocky Gene Fullington and Brenda “Denise” (Knapp) Fullington, was born September 10, 1981 in Waynesville, Missouri. Daniel, as he was known to his family and friends, grew up in St. Robert and graduated from Waynesville High School. He was a very intelligent individual and while in school was involved in the LEAP program. In the 5th grade, he was awarded the 3rd smartest child in the United States and was able to go to the NASA Center. As a child, Daniel grew up in a Christian home and was baptized at an early age. Daniel was a hardworking man. He worked in construction and could fix anything. He worked with his father and brothers for the family owned siding company. In his spare time, Daniel enjoyed being outdoors. You could find him either hunting for arrowheads and crawdads, swimming, camping, fishing, and hunting. He also liked to work on cars and was very talented with drawing. Daniel was blessed with one daughter, Kellie and he loved her tremendously and was very proud of her. He also loved his family and enjoyed spending time with them. Daniel passed away Thursday, September 24, 2020 in St. Robert, Missouri having attained the age of 39 years. He will be sadly missed, but fondly remembered by all those that knew and loved him. Daniel leaves to cherish his memory, his mother: Denise Fullington of St. Robert, MO; one daughter: Kellie Fullington of St. Robert, MO; one granddaughter: Wynter Fullington; two brothers: David Fullington of St. Robert, MO and Kyle Fullington of Oakwood, VA; one sister: Elisha Baker (Jason) of St. Robert, MO; several nieces, nephews, other relatives and friends. Daniel was preceded in death by his father: Rocky Fullington; paternal grandparents: Harold and Nancy Fullington; maternal grandparents: Robert Knapp and Brenda Medley; many friends, aunts, uncles, and cousins. Even though he is gone from our sight, Daniel’s kind and loving spirit will live on in our hearts forever. Celebration of Life services were held at 2:00 p.m. Friday, October 2, 2020 in the Memorial Chapels and Crematory of Waynesville / St. Robert with Linda Skaggs officiating. The songs “Jealous of the Angels” by Donna Taggart, and “When I Get Where I’m Going” by Brad Paisley and Dolly Parton were played. Dana Wood sang “Have I Not”. In lieu of flowers, memorial contributions are suggested in memory of Rocky “Daniel” Fullington and may be left at Memorial Chapels and Crematory of Waynesville / St. Robert.

The family of Rocky "Daniel" Fullington created this Life Tributes page to make it easy to share your memories.