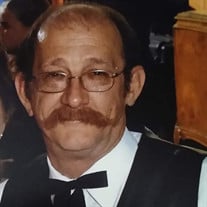 Rodney Lee Evans, 68, of Richland, Missouri, passed away Tuesday, May 11, 2021, in the University of Columbia Hospital and Clinics, Columbia, Missouri. He was born on August 1, 1952, at Fort Hood, Texas, to William Robert and Beatrice Lavern (Hering) Evans. Due to his father’s military career, Rodney and his family moved quite a bit, living in several states during his school years, before settling in Cleburne, Texas where he graduated with the class of 1970. Rodney married Roslyn “Renee” Orebaugh on November 15, 1984, in Richland, Missouri. He began his lengthy career with Ingram Barge Company in Cincinnati, Ohio, in 1982, and was the Chief Engineer on a Tow Boat, retiring in 2017. Rodney is survived by his wife, Renee Evans of the home; one son: Harold Lee Evans of Marshfield, MO, one step son: Douglas Ogle of Springfield, MO; two grandchildren: Gavin Evans and Clayton Evans both of the state of Arkansas; three brothers: Dennis Evans, Kenneth Evans (Janice), and Terry Evans (Jackie) all of the state of TX; one step sister: Julie Rowe of Richland, MO; one step brother: Benny Stevens of Richland, MO; brother and sister in law: Jim and Kim Orebaugh of Waynesville, MO; sister-in-law: Marty Roark of Las Vegas, NV; his step mother: Sonja Evans of Richland, MO; and Rodney’s faithful fur baby, Casey; several nieces, nephews, and several other relatives and friends. He was preceded in death by his father “Bob” on September 13, 2013, and his mother, Beatrice on October 28, 2013, one brother, Danny Lynn Evans, stepbrother, Johnny Stevens, and his infant niece, Amanda Evans. In his spare time, Rodney enjoyed being on his computer, working on cars in his garage, reading books, watching an occasional hockey game on TV, and wood working. However, Rodney especially enjoyed spending time with his family and friends. He will forever be missed by those he knew and loved. Arrangements were under the care and direction of Memorial Chapel of Richland. Memorial contributions may be made in memory of Rodney Evans and can be left at the Memorial Chapel of Richland funeral home.

Rodney Lee Evans, 68, of Richland, Missouri, passed away Tuesday, May 11, 2021, in the University of Columbia Hospital and Clinics, Columbia, Missouri. He was born on August 1, 1952, at Fort Hood, Texas, to William Robert and Beatrice Lavern... View Obituary & Service Information

The family of Rodney Lee Evans created this Life Tributes page to make it easy to share your memories.