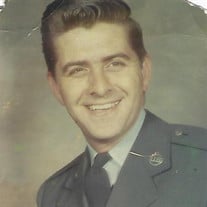 Roger Harry Porter passed away peacefully Friday, morning March 22, 2019 with his daughter Christie, son-in-law, Dan and beloved aid, Kristian by his side. Roger was born March 8, 1938 to Edna M. Nickless in Fort Dodge, Iowa. He was the oldest of twelve children born to Edna. Roger worked most his life with his first job selling newspapers in Fort Dodge at the age of nine. In 1955 he joined the Air Force three days after his 17th birthday. He served in Vietnam in 1969 and participated in Operation Babylift in 1975 while stationed at Clark AFB in the Philippines. Roger retired from the Air Force in 1981 as an Air Transportation Supervisor after 23 years of service and had earned the rank of Master Sergeant. In 1984, he began his second career as a Civil Service employee in the Air Transportation field at Scott AFB. He traveled all over the world for a while installing new reservation systems at different military installations. In November of 2000, he retired from Civil Service and moved to St. Robert to begin his third career for fun as the bookkeeper and delivery boy for his daughter at D&D Candy Bouquet, which he did for a few years. Roger loved to spend time with family. He was the best at spreading love and laughter with everyone around him. Roger was on many bowling leagues over the years. He was also quite the dancer…. all the women would stand in line for their chance to dance with the master. Roger also enjoyed going to the casino. He always seemed to have luck with those slot machines. He always said “Don’t call me lucky, call me lucky, lucky!” Roger was dearly loved by all those that knew and loved him. He leaves to cherish his memory, his five children: Darrell and David Foxhoven, both of Des Moines, IA, Robert Porter (Irene) of Gainesville, VA, Christie Dillon (Dan) of Waynesville, MO and Sherry Fields (Burt) of Columbia, MO; seven grandchildren: Amanda Price, Robert Dillon, Matthew Dillon, Ian Fields, Robert Porter, Jessica Pretz and Kathy Porter; six great grandchildren: Anna Dillon, Norah Dillon, Karl Price, Ellie Price, Lillie Pretz and Caleb Pretz; seven siblings: Cathy Moya (Marcello) of Lakeside, IA, Carolyn Dare (Corey) of San Roman, CA, Mary Torkelson (Bruce) of Gilmore City, IA, Mike Shimon (Gail) of Joplin, MO, Tom Shimon of Greeley, CO, Jake Shimon of Greeley, CO, and Ruth Weske (Mike) of West Bend, WI; many nieces, nephews, cousins, other relatives and friends. Roger is preceded in death by his parents: Cap & Edna Shimon; brothers: Gerry Shimon, and Lee Shimon; and sisters: Sharon Suhbier and Jody Schneider; and one daughter: Diana Foxhoven. Even though he is gone from our sight, his memory and his positive spirit will live on in our hearts forever. Services were held at 1:00 p.m. Friday, March 29, 2019 in the Memorial Chapels and Crematory of Waynesville / St. Robert. Serving as escorts were Dan Dillon, Robert Dillon, Matt Price, Burt Fields, Ian Fields and Nick Shimon. Graveside services with military honors in the Missouri Veterans Cemetery of Waynesville followed with Chaplain Patrick Moore officiating. Military honors were provided by Whiteman Air Force Base. Memorial contributions may be made in memory of Roger Porter to the St. Joseph's Indian School, Boys Town, ASCPA or the USO and may be left at the funeral home.

Roger Harry Porter passed away peacefully Friday, morning March 22, 2019 with his daughter Christie, son-in-law, Dan and beloved aid, Kristian by his side. Roger was born March 8, 1938 to Edna M. Nickless in Fort Dodge, Iowa. He was... View Obituary & Service Information

The family of MSGT (Ret) Roger Harry Porter created this Life Tributes page to make it easy to share your memories.