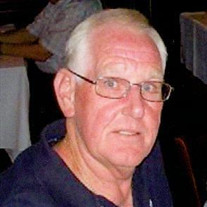 Ronald Martin Cronk, son of the late Harold and Marjorie (Duffy) Cronk, was born July 1, 1950 in Paterson, New Jersey and grew up in Fair Lawn, New Jersey. On July 21, 1979, Ron was united in marriage to Elizabeth Marie Decker in Fair Lawn, New Jersey. They shared over 35 years of marriage together. Upon their marriage, two families were blended and they shared two daughters: Pamela and Melissa. Throughout his life, Ron was a hardworking man. He was a baker at Nabisco and also worked in construction for a time. For over ten years, Ron worked as a machinist. In his spare time, Ron enjoyed playing darts and dominos, and watching NASCAR and football. He loved to entertain at his home and visiting with friends. Most importantly, he treasured the times spent with his family and especially his grandkids since retiring. Ron passed away Sunday, May 17, 2015, in General Leonard Wood Army Community Hospital of Fort Leonard Wood, Missouri having attained the age of 64 years. Ron leaves to cherish his memory, his wife, Elizabeth of the home; two children, Pamela Shuler (Kevin) of St. George, SC and Melissa Cohn (Daniel) of Dixon, MO; Pamela’s mother: Janice Raziano (Joseph) of Suwanee, GA; four grandchildren, Frankie and Mason Shuler and Dylan and Chase Cohn; two brothers, Raymond Cronk (Maureen) of Punta Gorda, FL and Harold Cronk (Joan) of the State of AL; two sisters, JoAnn Jones (Mike) of Stoneridge, NY and Susan Mizell (Wayne) of St. George, SC; a number of nieces and nephews; as well an host of other relatives and friends. Services were held at 6:30 p.m. Thursday, May 21, 2015 in the Memorial Chapels and Crematory of Waynesville / St. Robert with a U.S. Marine Chaplain officiating. The song “Now You’re Gone” by Basshunter was played. Memorial contributions may be made in memory of Ron Cronk and may be left at the funeral home.

The family of Ronald Martin Cronk created this Life Tributes page to make it easy to share your memories.