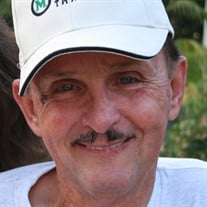 Ronald Gene Sasseen, son of the late Curtis C. and Alene E. (Johns) Sasseen, was born July 25, 1941 in Marion, Illinois. He went home to be with the Lord Friday, May 22, 2020 in the Mercy Hospital of Springfield, Missouri having attained the age of 78 years. As a young boy, Ronald grew up and attended school in Calumet City, Illinois. Shortly after graduating from high school, he entered the United States Army and served his country faithfully until his honorable discharge. Ronald worked as an over the road truck driver for 50 years. He logged a lot of miles during his career and was away from home, but he loved his four children dearly (Chris, Brian, Mellody, and Donley) and looked forward to seeing them when he would return home. In his spare time, Ronald was very talented when it came to woodworking. He especially enjoyed making carousels out of wood and also working on cars. Every Christmas, he would hang thousands of Christmas lights and everyone would drive by his house, just to see the lights. He also loved to play Santa for the grandkids. Ronald had made a profession of faith and attended Concord Christian Church. Ronald will be sadly missed, but fondly remembered by all those that knew and loved him. He leaves to cherish his memory three children: Chris Sasseen (Laramy) of Richland, MO, Mellody Zimmerman (Frank) of Union, MO and Donley Sasseen (Crystal) of Richland, MO; thirteen grandchildren; six great grandchildren; former spouse: Helen Clark of Richland, MO; three sisters: Betty Furry of Hammond, IN, Patricia Lambert of Wilmington, IL, and Donna Rains of Lebanon, MO; several nieces, nephews, other relatives and friends. In addition to his parents, Ronald was preceded in death by one son: Brian Sasseen and one brother: Joe Sasseen. Funeral services were held at 1:00 p.m. Wednesday, May 27, 2020 in the Memorial Chapel of Richland with Pastor Lee Todd officiating. Jared Sasseen sang “Hallelujah” and Jaimee Sasseen sang “Amazing Grace (My Chains Are Gone)”. The songs “Go Rest High on that Mountain” by Vince Gill and “When I Get Where I’m Going” by Brad Paisley and Dolly Parton were played. Graveside services with military honors will be held at 10:00 a.m. Friday, July 31, 2020 in the Missouri Veterans Cemetery of Waynesville / St. Robert. Arrangements are under the direction of Memorial Chapel of Richland. Memorial contributions may be made in memory of Ronald Sasseen and may be left at the funeral home.

Ronald Gene Sasseen, son of the late Curtis C. and Alene E. (Johns) Sasseen, was born July 25, 1941 in Marion, Illinois. He went home to be with the Lord Friday, May 22, 2020 in the Mercy Hospital of Springfield, Missouri having attained the... View Obituary & Service Information

The family of Ronald Gene Sasseen created this Life Tributes page to make it easy to share your memories.