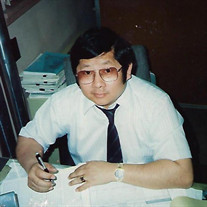 Ronald Junji Tanaka, son of the late Robert and Tameyo (Oki) Tanaka, was born February 22, 1945 in Newell, California. He passed away Tuesday, July 21, 2020 in his home in St. Robert, Missouri having attained the age of 75 years. Ronald grew up in Walnut Grove, California and then moved to the Bay Area (Richmond), California where he graduated from high school. He went on to further his education and graduated from San Jose State University with a Bachelor’s Degree in Accounting and Finance. Shortly after graduating from college, Ronald was drafted into the United States Army during the Vietnam War. He served for 2 years and was honorably discharged in 1969. After his discharge, Ronald continued serving his country by working as an auditor as a federal employee with the US Army and did so until his retirement after 49 years of faithful service. While working for the government, he worked in Germany, Japan, Korea, the Bay Area and Los Angeles. While working in Korea, Ronald met a young lady by the name of Kyong Cha Sun and they were united in marriage on November 28, 1975 in Chun Chon City, Korea. They shared over 44 years of marriage and were blessed with two children: Susan and Gerald. In his spare time, Ronald was an avid sports fan. You would find him cheering on his two favorite teams, the Oakland A’s baseball team and the San Francisco 49ers football team. He also enjoyed playing golf and would go every chance he could. Ronald loved his family tremendously. He loved spending time with them and would do anything to make sure that they were taken care of. He will be sadly missed, but fondly remembered by all those that knew and loved him. He leaves to cherish his memory, his wife: Kyong Cha Tanaka of St. Robert, MO; two children: Susan Tanaka of San Francisco, CA and Gerald Tanaka of St. Robert, MO; one sister: La Verne Romano (Ken) of Yerington, NV; one niece: Stacy Underwood of the State of New Mexico; other relatives and friends. In addition to his parents, Ronald was preceded in death by one brother: Stanley Tanaka. Graveside services with military honors was held at 11:00 a.m. Friday, July 24, 2020 in the Missouri Veterans Cemetery of Waynesville, Missouri with Pastor Tim Park, retired US Army Chaplain, officiating. Military honors were provided by the Missouri Honors Team. Services were under the direction of Memorial Chapels and Crematory of Waynesville / St. Robert.

Ronald Junji Tanaka, son of the late Robert and Tameyo (Oki) Tanaka, was born February 22, 1945 in Newell, California. He passed away Tuesday, July 21, 2020 in his home in St. Robert, Missouri having attained the age of 75 years. Ronald... View Obituary & Service Information

The family of Ronald J. Tanaka created this Life Tributes page to make it easy to share your memories.