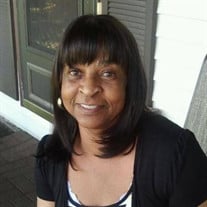 Rosalind Elizabeth Bell, daughter of the late Tyrone and Juanita Lucille (Blair) Waters, was born August 9, 1947 in Versailles, Kentucky where she grew up and graduated from high school. Rosalind moved to Rolla, Missouri where she met John Roger Bell and they were united in marriage and were blessed with three children. While living in Rolla, she was a cook at the University of Missouri and after moving to the Fort Leonard Wood area, she began working at the Post Exchange where she worked for 12 years. In her spare time, Rosalind enjoyed being outdoors working in her gardens and also liked to go bowling with friends and family. Most importantly, she loved spending time with her family, especially her grandchildren and she adored her great grandson. Rosalind passed away Friday, March 24, 2017, in Life Care Center of Waynesville having attained the age of 69 years. She will be sadly missed, but fondly remembered by all those that knew and loved her. Rosalind leaves to cherish her memory, her three children, Juan Bell of the State of Georgia, Regina McCray of Columbia, SC, and Irvin Collins (Miriam) of Colorado Springs, CO; six grandchildren, Anthony Collins, Jedrek Collins, Yolanda Adams (Patrick), Jessica McCray, Jady Bell, and Bryan McCray; a great-grandson, Liam Adams; her sister, Eleanor Middleton of Versailles, KY; her brother, Joseph Waters of Versailles, KY; a number of nieces and nephews; very special friends, Verly Young, April Euglow, and Rosie Robb; as well as a host of other relatives and friends. In addition to her parents, Rosalind was preceded in death by her husband, John Roger Bell. Services were held at 6:30 p.m. Thursday, March 30, 2017 in the Memorial Chapels and Crematory of Waynesville / St. Robert with Pastor Chris Hendrix officiating. The songs “I’ll Be Missing You” by Faith Evans and Puff Daddy and “No Ways Tired” by James Cleveland were played. Memorial contributions may be made in memory of Rosalind Bell and may be left at the funeral home.

Rosalind Elizabeth Bell, daughter of the late Tyrone and Juanita Lucille (Blair) Waters, was born August 9, 1947 in Versailles, Kentucky where she grew up and graduated from high school. Rosalind moved to Rolla, Missouri where she met... View Obituary & Service Information

The family of Rosalind Elizabeth Bell created this Life Tributes page to make it easy to share your memories.

Rosalind Elizabeth Bell, daughter of the late Tyrone and Juanita...