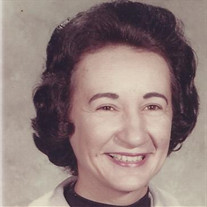 Rose Redmond was born in Bethlehem, Pa. on February 27, 1929. She was the daughter of Eli and Helen Rose (Sipos) Suznovich. Rose grew up in Staten Island, New York and New Jersey, where she received her Elementary and High School Education. She was employed at Camp Kilmer, New Jersey in Secretarial work before her marriage. Rose met the love of her life Silas T. Redmond, Jr. while vacationing in Montgomery, Alabama. He was in the U. S. Air Force stationed at Maxwell Air Base and Gunter Field. They were married on April 11, 1953, in the Livingston Avenue Baptist Church in New Brunswick, New Jersey. Two children were born to this union: A son, Timothy Lee Redmond, and a daughter, Tracey Lynn Redmond Foust. While her husband was working on his Bachelor and Master of Science in Education degrees at Arkansas State College, (now University) Rose worked at the College as Secretary to the Dean of Extension Services. She then completed her Bachelor of Science in Education degree at Henderson State University in Arkadelphia, Arkansas. She majored in Elementary Education, with a minor in Business Education. She did Graduate Studies in Early Childhood Education and Special Education at Arkansas State University. She became a member of the Methodist Church in Flat River, Missouri. in 1958 and a Charter member of the Methodist Women's Society of Christian Services in 1968. She was a member of the local Community Teachers Association, life member of Missouri State Teachers Association, and, after retirement, a member of Pulaski County Area Retired School Personnel and a life member of Missouri Retired Teachers Association. She was also a member of the American Association of University Women, a life member of the Disabled American Veteran's Women's Auxiliary due to her husband's service disabilities, and a member of American Association of Retired Persons. After a Career of 27 years in the Education Field as a Director of Child Development Services and an Elementary and Special Education teacher, she retired from the Waynesville R-VI School District, spending her last 12 years there as an Elementary teacher. Soon after retirement she became a Volunteer at the Waynesville/St Robert Senior Center. She served on the Board for ten years, and was Secretary to the Board for eight years. She loved to sew, made quilts for her family, and enjoyed trips to Branson shows, eating out with her husband, and family traveling. Checking out Flea Markets and Antique shops were fun for her. She enjoyed reading biographies of Christian and famous people. She enjoyed the time spent at the Senior Center. Rose loved her family and their visits, and time spent together. She is survived by her husband Silas; Son, Timothy Lee Redmond (with wife Linda); and daughter Tracey Lynn Foust (with husband Robert S.), plus five grandchildren: Rebecca Renee Guidry (with husband Mike), Robert Ryan Redmond (with wife Christy), Justin Aaron Redmond (with wife Jenny), Robert James Foust (with wife Collette), and Shawn Redmond Foust; plus five Great-Grand-daughters: Isabella Grace Redmond, Amira Renee Guidry, Abigail Lee Redmond, Sarah Ann Redmond, and Aleena Gizelle Guidry. Rose is also survived by two sisters: Catherine McGugan of Florida, and Susan Channel of New Jersey; plus three brothers: Raymond of PA, and Steve and Daniel Suznovich of N. J.; as well as three brother-in-laws: Max Earl, James Carroll (with wife Barbara) and Charles Lynn (with wife Kate) Redmond. Rose also is survived by several nieces, nephews, and other relatives, each one greatly loved. Rose was preceded in death by her father, Eli; mother, Helen; brothers: Paul and George; sisters: Helen and Mary; father-in-law: Silas Redmond, Sr.; mother-in-law: Charles Earle Redmond; sisters-in-law: Pat Nail, Jane McKeel, and Juanita Buck; brothers-in-law: Criss Crisman, Danny Whalen, Donald Nail, Bill McKeel and Lloyd Buck. She was loved and will be greatly missed by her husband of 63 years, her family and friends. Services were held at 10:00 a.m. Friday, August 12, 2016 in the Memorial Chapels and Crematory of Waynesville / St. Robert with Rose’s son, Pastor Tim L. Redmond, officiating. Tim also sang “Be Unto Your Name”, “Praise His Name”, “Lord Reign In Me” and “Thank You Lord”. Several family members and friends, including Rose’s daughter, Tracey, recalled their wonderful memories of Rose. Serving as escorts were Tim L. Redmond, Robert Ryan Redmond, Dennis Dye, Max Redmond, Sr., Robert S. Foust, Robert J. Foust, Shawn R. Foust and C. Lynn Redmond. Burial followed in the Missouri Veterans Cemetery of Waynesville, Missouri with Pastor Tim singing “In the Garden”. Memorial contributions may be made in memory of Rose Redmond to the GO-ACT in Love Ministries, in Jefferson City, Missouri and may be left at the funeral home.

Rose Redmond was born in Bethlehem, Pa. on February 27, 1929. She was the daughter of Eli and Helen Rose (Sipos) Suznovich. Rose grew up in Staten Island, New York and New Jersey, where she received her Elementary and High School Education.... View Obituary & Service Information

The family of Rose Redmond created this Life Tributes page to make it easy to share your memories.