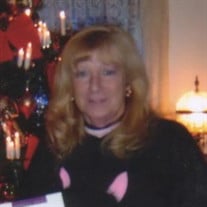 Rose Marie (Culey) Wheeler, daughter of the late Orville Dean and Eliza Elvina (Perkins) Culey, was born February 26, 1950. Rose grew up in the Kansas City area and attended Wyandotte High School. On January 28, 1967, Rose was united in marriage to Larry Lester Wheeler in Kansas City, Kansas. They shared over 49 years of marriage together and were blessed with three children: Jennie, Jay Cee and Ginger. Due to Larry being in the military, the family eventually came to the Fort Leonard Wood area where they remained after Larry’s retirement. Rose began working for EDP Enterprises as a first cook and served in that capacity for 29 years. Rose loved being outdoors, especially riding her motorcycle and going on long rides. She enjoyed going antiquing and thrift shopping and was an avid collector of beanie babies, clocks, milk jugs and Mickey Mouse. She was always looking for a bargain. Rose was a member of the American Legion Riders and the Freedom of the Road Riders. Most importantly, she loved her family and enjoyed spending time with them as much as possible. Rose passed away Friday, April 8, 2016 in her home having attained the age of 66 years, 1 month and 10 days. She will be sadly missed, but fondly remembered by all those that knew and loved her. Rose leaves to cherish her memory, her husband: Larry Wheeler of St. Robert, MO; three children: Jennie Smith, Jay Cee Wheeler and wife Ellen and Ginger Block and husband Percy, all of St. Robert, MO; eleven grandchildren; two great grandchildren; six siblings: Marvin Culey of Murfreesboro, TN, Elbert Culey of Kansas City, KS, Michael Culey of Kansas City, KS, Victor Culey of Marion, KS, Shirley Guinnip of Kansas City, KS and Charollette Anderson of Lawrence, KS; several nieces, nephews, other relatives and friends. Funeral services were held at 1:00 p.m. Monday, April 11, 2016 in the Memorial Chapels and Crematory of Waynesville / St. Robert with Rev. Chris Hendrix officiating. The songs “What A Wonderful World” by Louis Armstrong and “Today I Started Loving You Again” and “Silver Wings” by Merle Haggard were played. Serving as escorts were family and friends. Burial followed in the Missouri Veterans Cemetery of Waynesville. Memorial contributions may be made in memory of Rose Wheeler and may be left at the funeral home.

The family of Rose Marie Wheeler created this Life Tributes page to make it easy to share your memories.