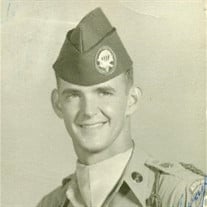 Roy Marshall Durham, son of the late Robert and Bernice (Hardin) Durham, was born March 5, 1938 in Beech Creek, Kentucky. He passed away Thursday, September 3, 2015 in his home of Dixon, Missouri having attained the age of 77 years. Roy grew up in Dayton, Ohio where he attended school. On March 15, 1955, Roy entered the United States Army and served his country faithfully until his medical retirement in 1963. For his faithful service, Roy earned several awards and commendations; some of which include: Expert Marksman and Good Conduct Medal and he was an expert infantry man. He served with the 82nd Airborne Division. On September 5, 1959, Roy was united in marriage to Linda Kay Hill. They were just two days short of celebrating their 56 wedding anniversary. Roy and Linda shared many wonderful years together and were blessed with four children: Brigitte, Dan, Patricia and April. Roy worked as a mechanical engineer. In his spare time, he enjoyed playing Sudoku and being on his farm with his dogs. He loved spending time with his family and friends. He was a member of the Clampers and a proud member of the NRA (National Rifle Association). Roy will be sadly missed by all those that knew and loved him. He leaves to cherish his memory, his wife: Linda Kay Durham of the home; four children: Brigitte Raylene Carpenter (James) of Jackson, OH, Larry Daniel Durham (Rachael) of Rolla, MO, Patricia Gail Fuentes (Tony) of Modesto, CA, and April Lee Ambrosia (Guy) of Dixon, MO; seven grandchildren: Jessica Long, Jennifer Carpenter, Danielle Durham, Kendall Fuentes, Lance Durham, Robert Ambrosia and Austin Ambrosia; ten great grandchildren with one on the way; one sister: Patricia Hockey; other relatives and friends. Services were held at 1:00 p.m. Friday, September 11, 2015 in the Memorial Chapels and Crematory of Waynesville / St. Robert with Chaplain Lindy Hardwick officiating. The songs “Amazing Grace” by Elvis, “See You Again” by Charlie Puth and “If Heaven Wasn’t So Far Away” by Justin Moore were played. Serving as escorts were the United States Army. Burial with military honors followed in the Missouri Veterans Cemetery of Waynesville. Military honors were provided by the United States Army of Fort Leonard Wood, Missouri. Memorial contributions may be made in memory of Roy Durham and may be left at the funeral home.

Roy Marshall Durham, son of the late Robert and Bernice (Hardin) Durham, was born March 5, 1938 in Beech Creek, Kentucky. He passed away Thursday, September 3, 2015 in his home of Dixon, Missouri having attained the age of 77 years. Roy... View Obituary & Service Information

The family of Roy Marshall Durham created this Life Tributes page to make it easy to share your memories.