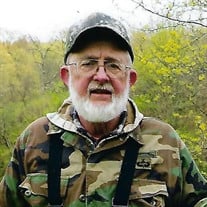 Roy “Calvin” York, Jr., son of the late Roy Calvin York, Sr. and Beulah Mae (Scott) York, was born August 17, 1954 in Richland, Missouri. As a young boy, Calvin grew up in the Richland area and graduated from Richland High School. Calvin loved working on machinery and that served him well when he decided to own and operate his own business, York’s Welding and Repair which he operated for many years. He was known for his hard work and dedication to make sure that his customers were always cared for. Calvin met his sweetheart, Lela Colleen Reid and they began their relationship 16 years ago. On January 15, 2020, Calvin and Lela were united in marriage during a beautiful ceremony in Oahu, Hawaii. Calvin gained a daughter, Taylor when he and Lela began their relationship and he loved her as his own. He was excited when she made them grandparents when Austin “AC” was born. He loved spending time with his little guy. In his spare time, Calvin loved being outdoors while hunting. He always had a story to tell about his hunting adventures. He was also a car buff. He knew everything there was about cars and had quite the collection of cars that he was proud of. He would go to different car shows over the years and was always looking for a great deal. He would take the car home and restore it, bringing it back to even better condition than when he purchased the car. Calvin was also an avid St. Louis Cardinal baseball fan. He would watch every game and always looked forward to being able to attend a game now and then. Calvin passed away Thursday, January 30, 2020, following a brief illness having attained the age of 65 years. He will be sadly missed, but fondly remembered by all those who knew and loved him. Calvin leaves to cherish his memory, his wife: Lela York, of the home; one daughter: Taylor Crawshaw (Ron) of Knob Nobster, MO; one grandson: Austin “AC”; two sisters: Sherry Sundell of Waynesville, MO and Brenda Wood (Allen) of Waynesville, MO; one brother: Terry York (Annette) of Richland, MO; several nieces, nephews, other relatives and friends. In addition to his parents, Calvin was preceded in death by his brother-in-law: Mark Sundell. Services were held at 12:00 p.m. Friday, February 7, 2020 in the Faith Baptist Church of Waynesville with Tracy Storie officiating. The songs “Dancing in the Sky” by Dani and Lizzy, “Halo” by Beyonce and “I Can Only Imagine” by MercyMe was played. Calvin’s sister, Sherry Sundell, recalled her wonderful memories as well as some of the congregation told stories about Calvin. Serving as honorary packers (as Calvin liked to refer to pallbearers) were Micky Carlew, Terry Coolman, Pat Lambeth, Charlie Meyer, Chris York, Mike Terrio, Herb Nelson, James Rosenauer, Larry Threlkeld, Greg Stockdale, Jim Bales, Keith Pritchard, Kevin Pritchard, Doug Yureko, Pat Ryan, Fermen Espinoza, Richard Zeigenbein, Doug Tillet, George Yoakum, Bill Debo, Freddy Robbins and Tyler Skyles. Services were under the direction of Memorial Chapels and Crematory of Waynesville / St. Robert. Memorial contributions may be made in memory of Calvin York and may be left at Memorial Chapels and Crematory of Waynesville / St. Robert.

The family of Roy "Calvin" York Jr. created this Life Tributes page to make it easy to share your memories.