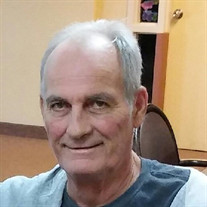 On Saturday, November 13, 1954 in Waynesville, Missouri, the Lord gifted Roy Franklin and Ramona Lea (Carroll) York with a beautiful baby boy, Roy Franklin York, Jr. Frank, as he was known to all, departed this life December 12, 2018 in Lebanon, Missouri. At an early age Frank professed his faith in the Lord. He was baptized, and was a member of the Swedeborg Baptist Church. Frank loved his family, friends, hunting and being outdoors. He had many jobs thru his life, from putting up hay for Sonny Jacobson, working in a trailer manufacturing plant, a muffler shop, but the job he loved most was at Dogwood Hills Golf Course. One of the things he loved the most was putting the greens to sleep for the winter and successfully waking them up in the spring. Frank was preceded in death by his mother, Ramona, July 14, 1997. Left to mourn his passing, one daughter, Cindy Wilde and three grandchildren, Dashia, Tianna and Trapas of Orville, California; his father, Roy York Sr. of Swedeborg, Missouri; two sisters and brother-in-law’s, Teresa and Tom Tinsley of Waynesville, Missouri and Patty and Terry Dietiker of Marshfield, Missouri; a niece, Tracy Alderman, (Bob) of Jefferson City, Missouri; a nephew, Caleb Hutton of Atlanta, Georgia; a great niece and nephew, Ramona and Wyatt Alderman of Jefferson City, Missouri; along with many other relatives and friends. Services were held at 1:00 p.m. Saturday, December 15, 2018 in the Memorial Chapel of Richland with Pastor Mark Tallant officiating. The songs “In the Garden” and “Go Rest High on That Mountain” were played. Serving as escorts were Tom Tinsley, Mick Hammack, Terry Dietiker, Rick Zweerink, Clay Clark and Larry Kline. Burial followed in the Crocker Memorial Park Cemetery of Crocker, Services were under the care and direction of Memorial Chapel of Richland, Richland, Missouri. Memorial contributions may be made in memory of Frank York, Jr. and may be left at the Memorial Chapel of Richland. Online condolences may be sent to www.memorialchapelsandcrematory.com

On Saturday, November 13, 1954 in Waynesville, Missouri, the Lord gifted Roy Franklin and Ramona Lea (Carroll) York with a beautiful baby boy, Roy Franklin York, Jr. Frank, as he was known to all, departed this life December 12, 2018 in Lebanon,... View Obituary & Service Information

The family of Roy Franklin "Frank" York Jr. created this Life Tributes page to make it easy to share your memories.